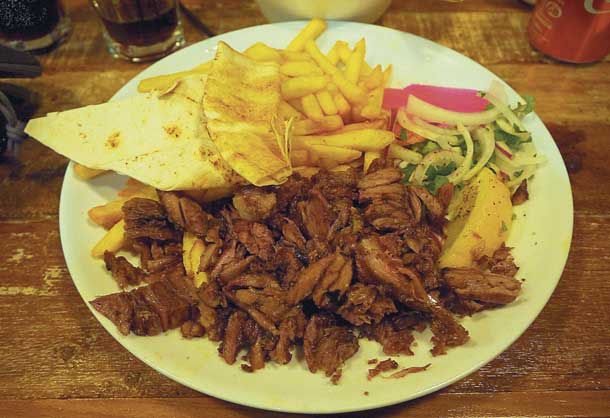 On only its second night open, one could forgive Ya Hala, Brixton’s new Lebanese grill room the occasional hiccup, but it has a little way to go to ensure it is more than just a decent kebabberie.

No drinks licence, some sort of industrial draft gusting from the ceiling and somewhat disorientated, waiters.

In the shell of what used to be Joy with raw warehouse distressed décor, a sprinkling of Verner Panton chairs and banquettes, de rigeur industrial styling alongside more conventional chairs and tables, it’s a nice space.

For Mrs B and I, breaking our half-hearted dry(ish) January for the night, a lack of beers was borderline traumatic.

There is very little that can go wrong with grilled marinated meats sizzled on a smoking charcoal grill, but the devil is sometimes in the detail.

Alongside some nice tasty meats, the fattoush could have done with a shot of adrenalin to wake it up from limp sulkiness, instead of steamy, crispy hot breads straight out of the oven (yes, I’ve been spoiled by the likes of Dishoom and even Lahore Kebab House), ours were standard cold pitta fare.

Which is not to say it wasn’t busy and isn’t already a workable pit-stop at reasonable prices.

The next few weeks will show if Ya Hala is going to be just a decent Lebanese addition to Brixton’s dining roster, or more than a dime a dozen one. Little improvements can go a long way.