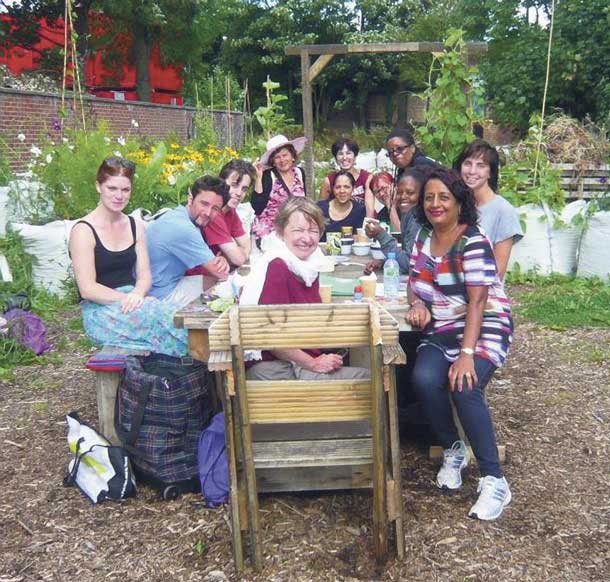 One of the first things that caught my eye after our family moved into the Loughborough area in November 2013 was a beautiful painting of a giant chaffinch by artist ATM.

It’s a little weather-beaten now since its been there from the start of Loughborough Farm over three years ago.

A few weeks later an invite to the planting of an orchard on nearby Wyck Gardens came through the door. As a lifelong urbanite I’d only a passing interest in trees and greenery, but our new home had a garden and so I thought I should try to gain some useful knowledge and maybe meet a few of the locals. 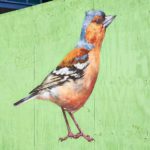 I helped plant half a dozen apple, pear, quince and cherry trees. In between I chatted to a couple of the farm volunteers, the keepers of the big bird, and promised to pay a visit to see what was going on.

I turned up on the next wet and windy Saturday. The farm bore no resemblance to the industrialised factory-farms you see from the motorway. The ground was once used by industry and probably polluted so things were grown in those big bags builders merchants use to supply sand and gravel.

Despite this, the farm managed to grow an amazing variety of edible plants – everything from artichokes to zucchini along with exotics like Nepalese mustard leaf and black tomatoes.

There was also a DIY group busy crafting planters, chairs and tables from old pallets and scrap materials. Probably my proudest achievement of those early days was the construction of a dining table from the wall of an old garden shed. On dry days the volunteers still take their tea on it (with cake baked by our wonderful Anthea!).

Loughborough Farm has thrived and helped to create a sense of engagement in an area with high levels of unemployment and deprivation. It has a core of regular volunteers and more who drop in when their busy lives allow. I now work alongside John (aka Joao), a skilful carpenter from Portugal.

Volunteers take home a bag of produce and it’s great to be able to cook and eat food that was in the ground only a few hours before.

The farm runs workshops on food growing and nutrition and diverse topics from mindfulness to bathbomb-making.

The farm has developed into something of a outdoor community hub, doing work with local organisations such as the Marcus Lipton Youth Club and Lambeth Harbour as well as providing space for local artists, poets and musicians.

One of our volunteers, Karen Hooper, is running a project called Wish You Were Here, working with GPs’ surgeries and vulnerable groups. Another, Walter Reed, is heavily involved with the Seven Bridges Project, which aims to transform Loughborough Junction’s grim Victorian railway bridges into inspiring works of art.

In 2016 we opened our very own Community Café (Friday 11–4) across the road at the Platform, where local residents and organisations can share their food cultures and provide affordable and nutritious meals.

Lambeth council obtained funding from the Greater London Authority to turn the space into affordable workplaces for local residents. Known as LJ Works, the site will also provide a permanent home for the Farm.

There’s plenty of growing and building still to do and I’m sure that life on the farm will continue to be as interesting as it has been in the last three years.

In the winter months we’re open from 1pm to about 3pm on Saturdays and Sundays (more in the summer). If you woud like to get involved, contact Charlotte at charlotte_oconnor@hotmail.co.uk Or drop in for a look around and a chat.

To support the farm, visit its website  –  to donate via PayPal.

Brixton Design Trail: a look back at the highlights