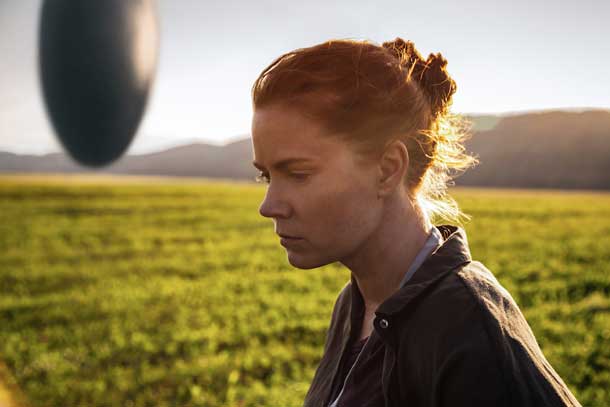 Award season is deep in progress and your cinema dance card will be getting full fast. Nicola Jones reviews the next one up, the ‘first contact’ film  ARRIVAL. The film is directed by Denis Villeneuve who helmed last year’s brilliant SICARIO and is currently directing the much anticipated BLADE RUNNER 2049. Here he brings masterful visuals to a well-paced script by Eric Heisserer. The script is adapted from a short story by Ted Chiang, and does not rely on violence or action to build suspense.

ARRIVAL centres on the appearance of twelve alien pods that hang above certain points across the globe. The US military recruits Dr Louise Banks (Amy Adams) to lead a language team to navigate first contact and communication with the pod above Montana. She is joined by physicist Dr Ian Donnelly (Jeremy Renner) who provides the science and pairs with her as they enter the pod.

The film resists alien action temptations to use violence to create drama, and is able to deftly create a gripping mood. The core of this is rooted in Adam’s strong performance as a linguist tapping into the emotional capacities of language and time. Adam’s gives Louise a gloss of shock to everything she encounters, including her own bravery.

The sequence of the pairs’ entrance into the pod is breath-taking and the simplistic yet high concept take on the aliens feels fresh, pushing against genre. Villeneuve reunites again with production designer Patrice Vermette whose work is complimented by cinematographer Bradford Young. He also works again with composer Jòhann Jòhannsson whose score builds into this mood. There is one odd out sequence that pulls away from the mood, but overall ARRIVAL is a gripping film that will surely be a player this award season.

ARRIVAL is in theatres in the UK (including The Ritzy Cinema) on 11 November.