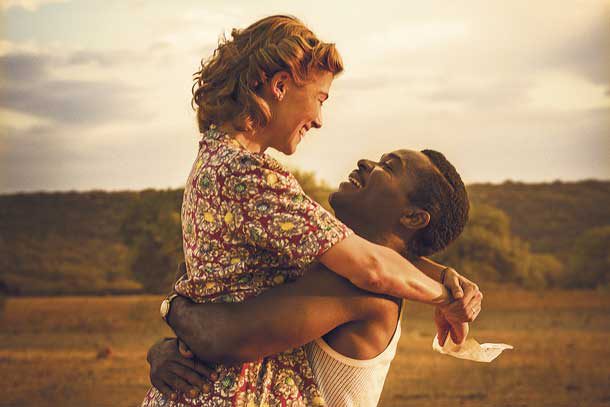 The biopic has been both a star maker and a star enforcer. This year comes a biographical film that centres on a relationship rather than an individual figure.

A United Kingdom attempts to explore the marriage between white English woman Ruth Williams and the crown prince of (what is now known as) Botswana, Seretse Khama.

Directed by Amma Asante (2013’s Belle), the film is lofty in its pursuit of condensing a courtship of a year into the first five minutes of screen time.

More so, it immediately alienates a modern audience who might mistake the proposal as only happening after three dates.

A common post-war occurrence, surely, but not the real case with this couple.

So hastily in love Ruth leaves her unaccepting family in England and heads to Botswana-land to accompany Seretse as he returns home to take his crown.

Rosamund Pike, who was superior in 2014’s Gone Girl, is not given any true moment to shine as Ruth. Her glacial face is an excellent mask for the difficulties of her situation, but that is about it.

David Oyelowo as Seretse has more of a presence, which is expected after his excellent turn as Martin Luther King Jr. in 2014’s Selma.

His rousing plea to his country is, well, rousing, but his Seretse is unencumbered with complexity.

In fact, the racial dealings of the film are presented as very black and white in a situation that was certainly built entirely in the grey.

The Botswana setting is the ultimate star of the film and Sam McCurdy’s cinematography offers the audience the beauty of this African country at every opportunity.

To its credit A United Kingdom was shot in Botswana, but the film is clearly weighed down with efforts to please the remaining family of this couple.

Guy Hibbert’s script is repeatedly caught in hackneyed dialogue and the emphasis is placed far too much on the political ramifications of this marriage to England than on the people of Botswana or the couple themselves.

A United Kingdom is in theatres in the UK on 25 November.