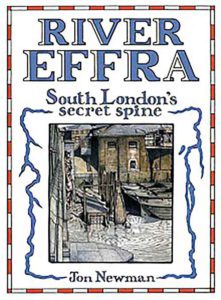 Romantics may wish to avoid a comprehensive new book about the River Effra.

Even before the late nineties arts project Platform ran a convincing but entirely bogus campaign to bring the Effra back above ground, it has inspired local imaginations.

As the Platform campaign noted after the emergence of the Effra Liberation Front – which was not part of its plans – “The Effra project was deliberately constructed to be a highly convincing simulacra of a Docklands ‘development agency’ aesthetic, and some would say too convincing for its own ethical good, and continues to raise hackles and chuckles when we present it today”.

He swiftly and effectively dismisses myths about viking invasions and barges full of royals using the Effra to reach Brixton from the Thames.

He shows that speculation about the name Effra originating in a Celtic word meaning “torrent” is almost certainly very wide of the mark.

For hundreds of years the stream had no name at all and Newman demonstrates that, when it finally got one, it was probably a corruption of “Heathrow”, a local place name. Try saying it quickly with a Sarf London accent after a few bottles of Brixton Brewery’s Effra Ale.

The river’s course did not run along Effra Road, but it did drown the landlord of the White Horse (now Brixton Jamm) when it ran along Brixton Road.

And, as it did, it carried the raw sewage from Brixton, Dulwich and other points along its route which begins in the hills near what is now Crystal Palace.

It was this that motivated the eventually successful campaign to have it covered over. Lambeth council’s elegant manhole imitations to mark the river’s course that were put in place in Brixton earlier this year seem to celebrate a rural past that hardly existed, rather than a triumph for public health.

Newman is also convincing when he concludes that the river’s course was changed radically by human intervention at the point where it reached the area near the Oval. He also shows that anyone claiming to know where the Effra flows into the Thames is wrong.

What he does do is shine a light on the development of Brixton, London’s sewage system and the refusal of “lost” rivers to go away.

One of several excellent maps showing the former course of the Effra confirmed my suspicions about the fate of a collection of original Rolling Stones singles and psychedelic posters in a Brixton cellar that was filled by five feet of water that disappeared as suddenly as it arrived.

No-one who cares about Brixton should miss this book and it would be a great gift for any local – new or old.

Brixton to Siberia by Nissan Micra