Lambeth council leader Lib peck has written to Network Rail chairman Peter Hendy asking him to meet her and Brixton businesses to explain why, despite assurances, work has not begun on the arches on Atlantic Road and Brixton Station Road.

Network rail’s planning application for the arches was granted at a Lambeth council planning meeting on 2 August this year where protesters warned that Brixton’s unique character might not recover from the closure of the arches. 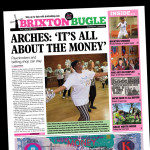 Local Coldharbour ward councillor Matt Parr had, at the meeting, “stressed the importance of work starting promptly and being completed to schedule so disruption to tenants, local residents and neighbouring businesses could be minimised,” said Peck.

“All along we have made clear that the refurbishment should maintain the individual and unique character of the Arches and Brixton as a whole.

“We also sought assurances that Network Rail would put in place an effective management plan, ensuring that agreements with tenants were concluded in good time to avoid delays to the start of refurbishment and prevent Atlantic Road and Brixton Station Road becoming a ‘dead zone’,” she said.

“Regrettably this has not happened. Vacant possession appears not to have been taken, work has been delayed and there is growing concern amongst local businesses about reduced footfall and increased levels of anti-social behaviour.

“I should be grateful if you would agree to meet with me, local councillors and businesses to discuss these concerns.”

One of the objectors at the planning committee meeting, James Castle, pointed out that Network Rail was seeking to redevelop the arches in a single process as it was more economic. He said: “There is no good reason why Network Rail could not refurbish each arch, where it needs it, on a piece-meal basis.  This would prevent shutting down the entire area as a construction site for the years it will take.  It is not the job of the planning committee to have anxiety about the economics.”

A Network Rail spokesperson said: “We have always been clear that the proposed redevelopment scheme would be completed within 12 months of our having vacant possession of all of the arch units.

“This will inevitably impact upon the timescale for completion of our overall scheme, however we are progressing with enabling and other necessary works to the vacant arches in order to remain as close as possible to our works timetable. Lambeth Council is aware of this.

“We very much regret the inconvenience caused to our tenants who have vacated and have signed contracts to return to a redeveloped unit and will continue to support them throughout this process.”

Asked why, if Network Rail was going to have to work on the arches while a pawnbroker and betting shop are continuing to trade in them, it could not work while other traders had not vacated, the spokesperson replied: “We could not phase this work and still make the project economical, which we have to do because we are tax and farepayer funded.

“The units under the arches are in poor condition and we also have to inspect the arches themselves for safety reasons, and to protect the many thousands of passengers whose trains run over them every day.”