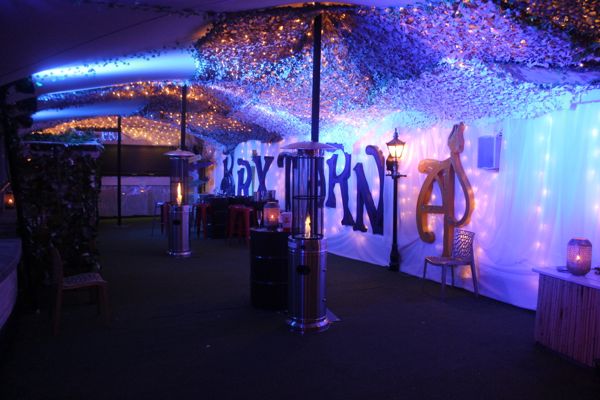 Words and pictures from our food/arts correspondent Mark Muldoon

Brixtarnia is the new winter garden the Brixton masses weren’t exactly screaming out for. More likely, it’s an answer to the question ‘what the hell are we supposed to do with our giant rooftop terrace bar in the winter months?’ To which the answer appeared to be: cover it, theme it and make it look pretty. Evidently, The Prince of Wales have decided they’d like to try and make money from the space a little more often than the nine days a year it’s ever sunny enough to attract Brixton drinkers up there.

Still, it should be stated that London is bloody packed with winter gardens this year – Brixtarnia could justifiably feel upset for not being included in Time Out’s roundup of the current 12 (!) best in the city. You have to question why there’s a demand for people to socialise outside in the winter, when – you know – cosy neighbourhood pubs exist, but it’s certainly not stopping these places from opening. Locally, Brixtarnia is also competing with Big Apple Brixton, the latest rooftop concept from the people behind Brixton Beach Boulevard, so even Brixton is proving to be a crowded marketplace for semi-outdoor winter drinking.

A Narnia themed makeover is the concept they’ve gone with, then. Before we come to that though, there’s the matter of the name to contend with. 2016 hasn’t exactly been devoid of annoying portmanteaus but Brixtarnia still puts in a decent fight to be crowned the worst. Always keen to be seen as a helpful member of the local community, however, Brixton Blog has done some thinking to try and come up with some names that – whilst also nowhere near passable themselves – are certainly not nearly as bad as Brixtarnia: ‘The Rooftop Forest’, ‘The Magic Faraway Rooftop’, ‘Skygarden 2’, ‘The Enchanted Rooftop’, ‘Secret Rooftop Garden Party’, ‘Catalyst for Brixton Gentrification Debate pt. 792’, and ‘Don’t Worry We’re Not Letting People From Clapham In’.

We’re happy to confirm though, that it doesn’t get any worse than the name. Brixtarnia is an attractive, quite fun place to hang out in. You’d still obviously bring your coat along, but on the cold evening we visited Brixtarnia was also keeping the warmth in pretty well.

Food wise, there’s a hot dog stall that’s admirably not afraid to go to town on the toppings. We opted for the Paprika sausage hot dog, which was a riot of different conflicting textures, made all the more disappointing by the fact that there was not all that much of interest going on flavour-wise. Still, you’re getting a filling meal for £6:50, so we’re not complaining too much. If you’re drunk on a Saturday night on the rooftop, it’ll do the job. The problem comes when comparing it to the food offer at Big Apple Brixton, where (amongst others) they’ve got the superb Burger Bear and the good-if-slightly-eyeroll ‘Mac to the Future’. Put simply, BAB unquestionably wins the food round. 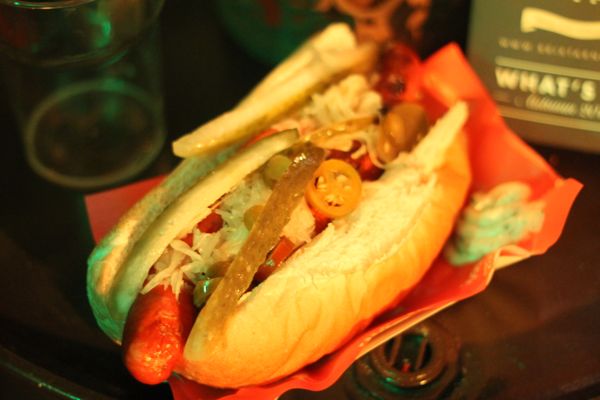 There’s hot buttered rum on the menu, which weirdly seemed to come with a faint hit of pineapple. It’s a great, fairly bold drink, even if – as with all the seasonal hot alcohol drinks that show up around this time of year – you have a suspicion that any actual alcohol content evaporated long before you showed up. Science-minded readers, get in touch on this please.

You couldn’t really argue with the suggestion that Big Apple Brixton is a more ambitious undertaking of the two, but we’ve ended up having broadly similar feelings towards both. You’ll get free entry to Brixtarnia some weeknights and at the weekend it seems it’ll be included in your clubnight entry fee. Big Apple Brixton are running clubnights at the weekend, so will be pushing a similar system. We’d say these things are good to stop by for free, but probably not worth paying for, unless you’re also looking for dancing. Instead, could we recommend a cosy pub?
Mark Muldoon discusses all the fun Brixton – and London in general – stuff on Twitter and Instagram respectively.