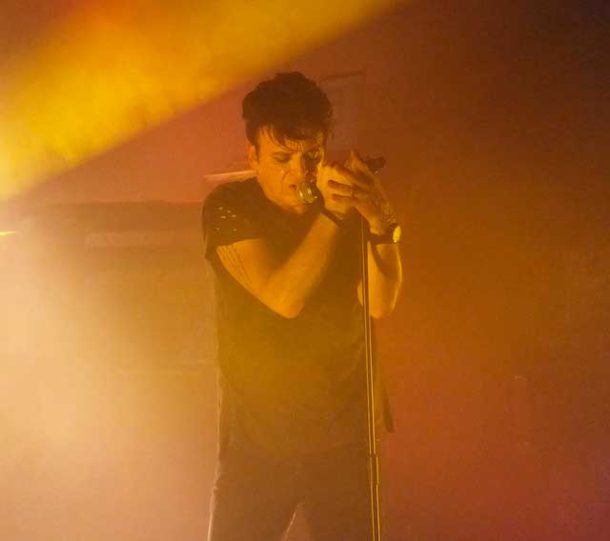 It seemed a fitting venue, name-wise at least, for Gary Numan to play. It was also a fitting location for the final show of his latest tour -an intimate enough space (though not as bijou as Bush Hall the previous night) where he could commune with the legion of faithful Numanoids who filled the hall.

The tour in question was celebrating the three albums that had cemented his reputation way back when – Replicas, The Pleasure Principle and Telekon – and the evening promised a healthy dose of tracks from each, along with, we were told, some surprises.

As the lights dimmed and dry ice billowed across the stage, the set kicked off with Replicas, the title track to the album, swiftly followed by the relentless riff of Metal from The Pleasure Principle. Other classic cuts included You Are In My Vision and Me! I Disconnect From You, and there was also M.E., which is probably better known these days for being heavily sampled by local danceologists Basement Jaxx on Where’s Your Head At?

The Numan sound these days is a tad more industrial than of old, and his band gave a harder, darker edge to sci-fi dystopias like Down In The Park. Indeed, they blended in well with some of the newer material that Numan introduced, both from his most recent album, the acclaimed Splinter (Songs From A Broken Mind) and the as yet unfinished Savage, with brand new song Bed Of Thorns making its debut.

As a performer, Numan has evolved too – no longer the austere, immobile figure you saw on Top Of The Pops or The Old Grey Whistle Test, he now bobs and weaves about the mic stand, slinging on a guitar or contorting himself over a keyboard.

The last part of the set was inevitably heavy on the hits, with We Are Glass, Cars and the power synth pop of I Die: You Die before climaxing with the behemoth that is Are ‘Friends’ Electric?

It was interesting that Numan opted to play the most well-known songs before the encore rather than holding one of them in reserve. As it was, the band came back on with a couple of unexpected numbers, namely We Are So Fragile, the B-side to Are ‘Friends’ Electric? and a real oldie in the shape of My Shadow In Vain, from the debut Tubeway Army LP. After an evening reliving past glories, it seemed apposite that Numan should bring us back to the present, finishing with Here In The Black from Splinter (Songs From A Broken Mind). I remember Gary Numan say at the Replicas retrospective at the Forum last year that he always preferred looking to the future, but even after more than 35 years, the songs played tonight still sound like the future.