Plans for the future of the Carnegie library in Herne Hill will be on display from tomorrow in the nearby St Saviour’s Church on Herne Hill Road.

Library campaigners attacked what the council described in a flyer as a chance to give feedback and speak to local councillors about the future of the library as being both too brief and impossible for anyone with a regular job to attend.

The council said that after a planning application for the changes had been submitted at the end of this month, there would be a “formal and detailed” consultation with residents. 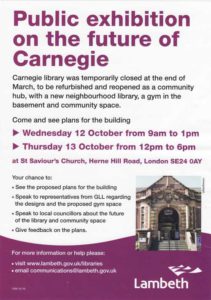 The exhibition is open for just two days – from 9am to 1pm tomorrow (12 October) and from noon to 6pm on Thursday.

Laura Swaffield, chair of Friends of Lambeth Libraries and a leading member of the Defend the 10 campaign, said: “The word ‘consultation’ is studiously avoided in the flyer.”

In a claim contested by the council, she said that, with the exception of plans for the Durning and Tate South Lambeth libraries, nobody in the borough had been consulted about the “hated ‘Culture2020’ plans to destroy four out of 10 libraries”.

Cllr Jack Hopkins, Lambeth council cabinet member for regeneration, business and culture, said: “All the information from this exhibition, and more, will be available online for everybody to see”.

The information is due to be available from this afternoon on the Lambeth council website.

Hopkins said that an exhibition about the Carnegie in June – which was also criticised by campaigners – “saw large numbers of people attend throughout the day”.

Once a planning application for the changes to the library building had been submitted at the end of this month, a “more formal and detailed consultation with residents” would take place.

He went on: “Many residents are already enjoying neighbourhood library services in both Waterloo and Upper Norwood, where libraries are now very successfully hosted by local community groups in partnership with the council.

“We are confident that the Carnegie building will be able to provide a strong offer for the community, including a library service, for many years ahead.” 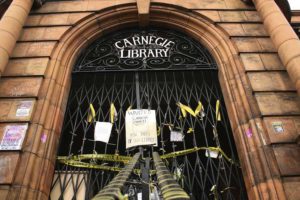 Swaffield said the plans to build a gym in the Carnegie library to be run by its leisure provider Better (formerly GLL) would involve spending £700,000 on excavating the basement to accommodate it.

“However, that won’t stop GLL being given the run of most of the ground floor for ‘yoga and higher energised classes such as body pump’, she added.

She said that at the June exhibition, GLL staff and top-ranking Lambeth staff had no answers to questions like:

How is this supposed to work financially?

The Blog asked Better/GLL for comment but, as usual, there was no response.