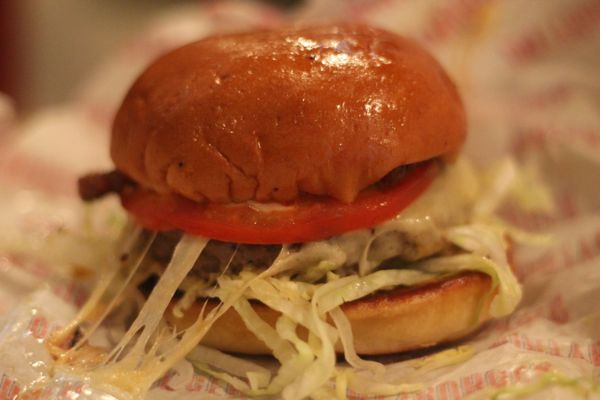 You might not be too surprised to hear that a new burger joint has opened in Brixton.
It’s called Dirty Burger, and it arrives courtesy of Soho House, an organisation that specialises in the kind of private members clubs popular with the type of people who own Apple Watches and (for the gents) at least one pair of red trousers. They’ve certainly got a good reputation for this high-end stuff. The restaurant inside the Hoxton Holborn Hotel was for a while my favourite in London, although its shine seems to have faded slightly since it opened.

Dirty Burger isn’t Soho House’s only attempt at creating a chain-ready popularist concept. They’re also behind Chicken Shop (skip your mains and go straight for their five star apple pie), and Pizza East (wildly overpriced for what it is). Now, you couldn’t exactly be blamed for staring at these offers and thinking: pizza, chicken and burgers? Not exactly living dangerously with their mass market concepts, are they. It appears Soho House have based their restaurant opening policy on the tastes of those most discerning of early-noughties foodies, the Fast Food Rockers. You imagine that if Soho House had decided to build a cinema in Brixton rather than a Dirty Burger, it would be wall-to-wall superhero movies and 80’s franchise reboots.

Effort has certainly been spent on getting the right look for the new branch. It’s a decent mix of the usual faded/reclaimed industrial-ish features, and retro-American diner seating. The Dirty Bacon burger (£7) is an okay 6.5/10 affair – there’s some nice caramelisation going on – but it’s otherwise fairly unexciting by modern burger standards. And by modern burger standards we’re basically saying that it’s not as good as the Honest Burger from Honest Burger. The veggie cop-out (£6) isn’t particularly innovative, but it is very good. It’s got a decent mix of crunchy and sloppy textures in there, and is tasty enough to convince this mushroom hater that maybe the vegetable isn’t the very definition of evil, after all.

The highlight is the vanilla milkshake, which is higher-end stuff, although obviously you’d bloody expect that for £4.50. it’s heavy on the cream content and seemingly pretty identical to those on offer across town at Bleecker St. Burger, and that’s certainly no criticism. It’s superb. You can pay £3 extra to add shots of alcohol in if you like, though if we’re honest Blues Kitchen do ‘hard shakes’ more inventively than here.

There’s strong ‘we didn’t have any better ideas’ vibes coming from the crinkle cut fries (an extra £3.50), which may have been acceptable at kids parties in 1997, but in a new world of rosemary salted chips and chicken fat dripped chips they make for a pretty pointless addition. Onion rings were exactly as you’d expect onion rings to be. There are monthly specials, and when we visited Sweet Potato Fries were a better alternative. You can double up on patties for £3, which throws the meat to ‘other stuff’ ratio way off, and only goes to highlight that our patties were on the dry side. 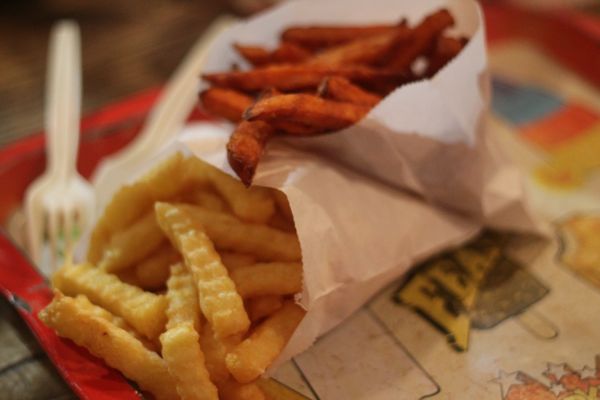 You’re left with a faint sense of ‘this’ll do’ about Dirty Burger. You’d have thought, with only five food items on the permanent menu, they’d have come close to perfecting them all. Like – and we’re sorry to again return to this point – Honest Burger has done. Still, it’s affordable, and as it’s a Nando’s style pre-pay-at-the-till affair, you won’t need to worry about tipping (pity the poor staff). It’s a place to swing by if Honest Burger is full up and you quickly want to eat before your film at Ritzy or gig at the Academy. But then, did you know Honest Burger do takeaways? You could quickly go there instead. So, you know, maybe just do that. Feel free to stop by here for a vanilla milkshake on your way back though.

Brixton Blog visited Dirty Burger twice. Once on their own bill and once as a guest of the restaurant