Local religious leaders and Brixton Hill councillor Adrian Garden joined James Asfa, a community organiser for Citizens UK, outside Brixton Tube this morning (4 July) to distribute stickers expressing solidarity against the wave of hate crime that has followed the vote to leave the European Union.

A solidarity rally organised by Lambeth trade unions Unite and Unison is due to take place outside Olive Morris House on Brixton Hill at 1.30pm today.

Both initiatives are part of nationwide activity to support migrants in the UK.

Citizens UK said reports of hate crime rose by 57% last week, according to the national police chiefs’ council. Many London Citizens members had “either personally, or through someone they know, been impacted by growing instances of racist and xenophobic abuse”. 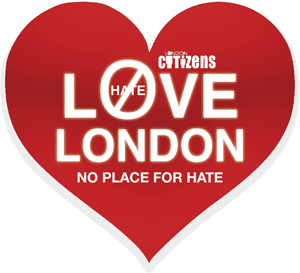 Members gathered outside several Tube and train stations across London to spread the message As well as stickers, they distributed love hearts and cards with details on how to report hate crime.

London mayor Sadiq Khan, said: “I will operate a zero tolerance approach to any attempt to hurt and divide our communities, and I have asked the Met police to be extra vigilant in tackling this deeply worrying rise in hate crime.

“London doesn’t just tolerate difference, it celebrates it. So it’s great to see London Citizens members rallying together to show that there is no place for division in our communities.

“I urge anyone affected by abusive behaviour to report it to the police immediately, and for Londoners to pull together and rally behind this great city now more than ever.”

Esmat Jeraj, a member of South London Citizens, was racially abused earlier this week. She said: “This demonstration of love and solidarity is organised communities coming together to show that all are welcome and that there is no place for hate of any form in London.

“We’re not here to be labelled as victims. We’re equal stakeholders of this rich and multicultural city, and are very concerned with the rise of bigotry and intolerance.

“Through this event we will take back control of our city and show the values that we all stand for; those of respect and equality.”