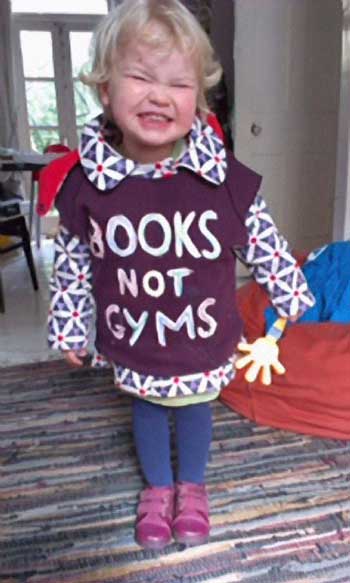 As Lambeth council mounts a brief exhibition about the future of its Carnegie library, Megan Roberts, whose earlier posts on the Blog about Lambeth libraries moved many readers, reflects on life without a library nearby

After two months of sulking, Feets and I have started going to Brixton library, because I realised that, Carnegie or not, I want her to grow up loving books and valuing community spaces. But every time we go, I leave with an ache inside that is so hard I wonder how we’ll ever just move on. It still seems impossible to believe that our libraries could just close, right in the heart of so much community affection.

I’ve discovered that we can enter and leave Brixton library without speaking to a soul – the desk is set far back and the staff are impossibly busy. Admittedly, we often see one of the Carnegie librarians and share a moment of nostalgia, but any other staff walk straight past us.

More practically, Carnegie was the only place I ever took Feets without the buggy – a massive first step in independence for both of us. It was near enough and up a quiet enough road that it was the obvious destination.

I know lots of people live in Brixton, but with the crowds of people and traffic, my general tactic there is to get my business done as quickly as possible and leave. Sadly, this carries over into our approach to the library. Especially as Feets can run straight out the door into the road without anybody noticing.

On another note, I had my first experience of requesting a book and finding it impossible to get hold of in anything in less than a month, meaning that tomorrow night I’m missing book club as I haven’t read the book.

Initially I saw this simply as bad luck and nobody’s fault, but now I’m not so sure. Surely with a number of Lambeth libraries closed, there are less books available? Presumably some copies of the book are likely locked behind Carnegie and Minet doors? For me, requesting books is the only way I can really choose a book, as I just don’t have time to browse or search while supervising a toddler.

And my agonising experience with the machines continues … I still haven’t paid my fines and frequently just leave a book behind because the machines can’t issue it.

Now I’m expecting another baby. It’s due at the beginning of winter, a season that I dread each year, and I’m not quite sure where we’ll go to get out of the house.

Our children’s centre has less and less on, breast-feeding support has gone … there is literally nowhere indoors for us to walk to when the baby is screaming and Feets needs a change of scene.

On today (21 June) and tomorrow, Lambeth is holding an exhibition to share and invite feedback on its plans for the future of Carnegie (sadly no longer named “Carnegie Library” by our councillors), in St Saviours church hall on Herne Hill Road. Simultaneously, Defend the Ten, the campaign to keep all ten Lambeth libraries open, will mount a “Pop-Up Carnegie” in Ruskin Park next to the hall, including books, art activities, storytime and a consultation about the library’s future. Visit Defendthe10 for details.

Guest - 16 May, 2020 0
Papa’s Park is an open access playground in the heart of Brixton, that has seen many generations of local children pass through its gates....

Contributor - 26 April, 2020 0
Protesters against the threat of eviction of Nour Cash & Carry from Brixton’s Market Row crashed into a Zoom and Facebook DJ set by...

5 May, 2020
We use cookies to ensure that we give you the best experience on our website. If you continue to use this site we will assume that you are happy with it.OKPrivacy policy