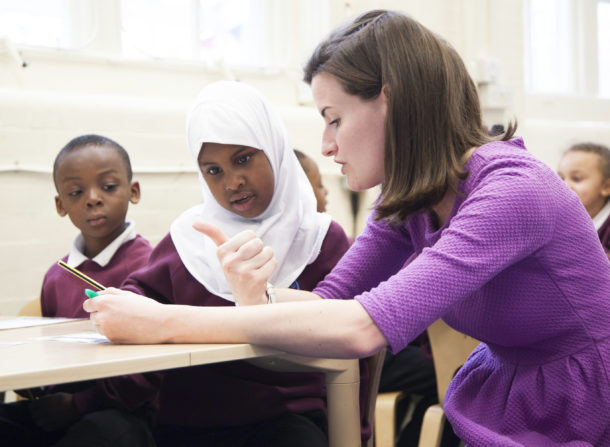 Brixton’s Hill Mead primary school on the Moorlands/Somerleyton estate is preparing to play an important role at the heart of the age-old and ongoing debate about teaching methods.

It will hold its first conference next month, bringing together local and national education experts and teachers to discuss new methods of assessing pupils’ progress and how they learn.

Last year Hill Mead was judged “outstanding in all areas” by the national education inspector Ofsted (Office for Standards in Education, Children’s Services and Skills) and has a growing reputation for its creative approaches to teaching.

The conference “Assessing Children’s Thinking and Learning”, is designed to build on the school’s success and to forge links with like-minded schools and educators and to enable them to share their experiences.

It comes as the way primary age children in England are assessed is changing.

Until September 2014, primary school children took SATs tests were rated according to a “National Curriculum level” – a number from 1 to 3. (SATS is an acronym with no agreed meaning, but it could stand for Standard Assessment Tests).

From September this year, teachers will use the results of SATs tests to help them judge how pupils are progressing. But they supposed not to be the only way of assessing progress. Teachers at the end of year 2, for instance, are asked to take into consideration what they have seen of a pupil’s progress through the whole of years 1 and 2 to get full and accurate picture of whether they are performing as expected or need more support. This assessment is sent to parents as a report on progress in maths, English reading and writing and science at the end of the summer term. The results will be set out as a scaled score and an assessment of on whether or not a pupil jas reached the standard expected for their age.

Since the end of national curriculum levels, Hill Mead’s staff have stopped using numbers to measure progress and have, instead, focused on developing pupils’ critical thinking and learning skills.

Their approach is based on child-centred teaching. This is a controversial issue. Such teaching is often characterised as “lefty” and “hippy” and those words were used by outgoing Ofsted boss Sir Michael Wilshaw in 2014 when he said any school inspectors favouring such an approach “wouldn’t be working for me for very long”. Despite this, Ofsted says Hill Mead is outstanding in all areas of its work.

Debate on education and teaching methods has, for years, been characterised as being between two stereotypes: “chalk and talk” – in which pupils sit and listen to a teacher explain things to them – and “child-centred learning”, in which children learn by themselves through discussion and collaboration. It has been an often bitter debate characterised by wild generalisations and name-calling, especially in mass circulation newspapers. Critics of chalk and talk say children learn little and, especially, do not discover how to learn, while child-centred learning is attacked as being trendy, not based on the real world and an excuse for lazy teachers to do nothing.

Hill Mead’s approach may be child-centred, but it is a world away from the caricature created by the media.

It includes 100 per cent mixed ability teaching with no streaming or other divisions of pupils into ability groups.

It also rules out “extrinsic behaviour strategies”. These are things like awarding “stars” or stickers for good work or graphs showing each pupil’s progress. The theory is that such approaches discourage real learning by making rewards or punishments the end product of studying. Its opposite is “intrinsic” motivation – doing something, like learning, for its own sake and because it is rewarding in itself.

Hill Mead’s approach also stresses the need for both pupils and teachers to think regularly and often about how they learn and to develop “critical thinking” that they can apply to a range of subjects and situations.

Its “observing learning assessment framework” sees teachers observing and reflecting on children’s learning and attainments, while pupils reflect on their own learning and think about how they can progress.

You can see it explained in a video that  shows teachers and children from Hill Mead  discussing how the use of the school’s observation and reflection tools have supported and improved learning and teaching across the school:

The school’s curriculum – what and how pupils study – is freshly planned every term by teachers in each year group.

Learning is organised into topics that cross typical subject divides like maths and English so that interesting links can be made across subjects.

Pupils go on lots of trips and visits including many of London’s world class museums and other venues.

They regularly work with artists and performers and take part in concerts at the Royal Festival Hall.

The school has its own Fine Art Club. Its exhibition at Pop Brixton earlier this year was opened by the mayor of Lambeth.

Hill Mead has s a strong focus on maths and English, including communication skills. Pupils work with Brixton Blog and Bugle journalists to write a page in each issue of the Bugle.

The conference will explore the school’s unique educational outlook and the benefits of seeing improvement as more than a number on a spreadsheet.

The day will include talks from Dr Myra Barrs, Sue Ellis (both previous Directors of the Centre for Literacy in Primary Education) and Sarah Horrocks (Director of the London Connected Learning Centre).

People taking part in the conference will be invited to observe lessons across the school and to speak to staff and pupils about their experiences.

Winter Windows switch on at Brixton’s The Department Store

School’s breakfast club ‘something to look forward to every day’ –...