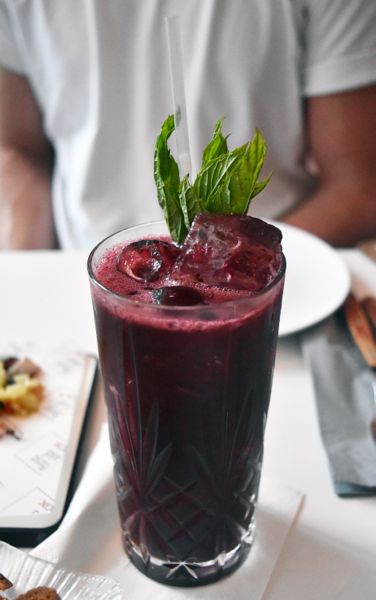 Themes are like Marmite – usually you love or you hate them. But I fail to see how anyone could not love the medicinal-theming of cafe-cum-bar-cum-restaurant First Aid Box up in Herne Hill.

According to its owners the idea was born out of plans to have their next venture inside Pop Brixton, hence the box reference. Their Pop-plans didn’t materialise, but since they already had a brand they were proud of and growing support, they kept it.

The concept carries through into the food, which is made with health and nutrition in mind. In a town being taken over by burgers, this fresh and health-conscious food provides a welcome detox. Of course, I’ll take that detox with a side of boozy cocktail.

Behind the small shop front on Dulwich Road, opposite Brockwell Park, is a space filled with medical paraphernalia such as conical vases, pipettes and the odd IV drip on wheels. Thankfully it’s much more cosy apothecary than stark pharmacy and the dim lighting on an evening, with the large windows out the front, give it an alluring den vibe.

The owners, Chris Edwards and Dave Tregenza, also own a drinks consultancy and so as you can imagine that their cocktails are better than most. You’ll find similar creativity in their sister bar/restaurant the Shrub and Shutter on Coldharbour Lane.

The cocktail menu makes for great reading and I will definitely be going back to try the mo-pea-to (if you didn’t get it, that’s a mojito made with pea-infused vodka). Tonight, I opted for a long version of their Conscious Pilot – a take on the classic Aviation – and my accomplice picked a cherry version of a Paloma. Both were totally refreshing and we could have drunk them into the wee hours.

Through into the small kitchen, chef Joe Knowlden runs the show and has put together a stunning menu, which temptingly they change regularly. To pull it off, he uses local suppliers such as Pished Fish, Jones the Butcher, Flying Fish and Harvey & Brockless. The menu is made up of small plates and the recommended dose for two people is between four and six. We went for five mains followed by two desserts.

The first to arrive was the sea bream ceviche, which actually turned out to be my favourite. The dressing was an earthy mix of soy and sesame and the chunks of fish came flecked with chilli and some super-powerful coriander. It was served with crisp breads which really helped with scooping. 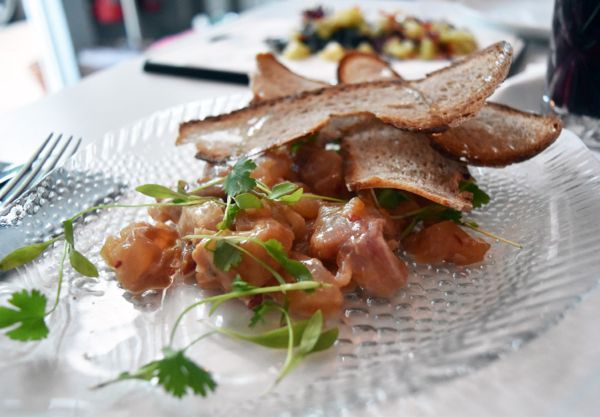 We were shortly joined by the two specials of the day – mackerel topped with a pickled-tasting wasabi cucumber salad and then chorizo and potatoes with hay smoked mayonnaise, which we learned had been freshly smoked that morning. It’s touches like this – the commitment to creating something individual and surprising – which make First Aid Box stand out from the crowd. 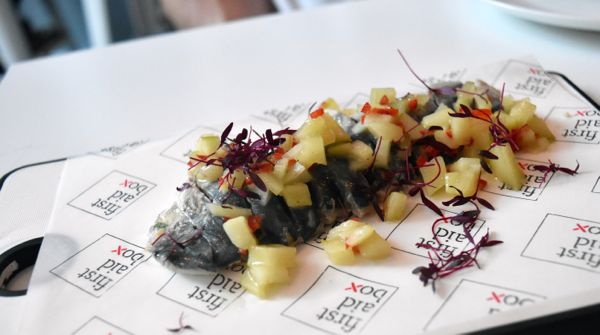 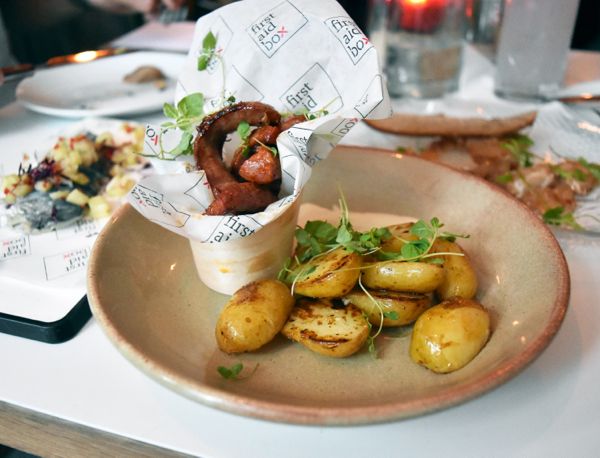 The two meat dishes were the last to arrive. The bavette steak which came served with Café de Paris butter (butter made better with numerous herbs and spices) and a zingy chimichurri green sauce was juicy, tender and blushingly pink. And finally the smoked duck breast and soft rhubarb contrasted texturally and in flavour with the crunchy and salty black pudding crumb. Such pleasing combinations. 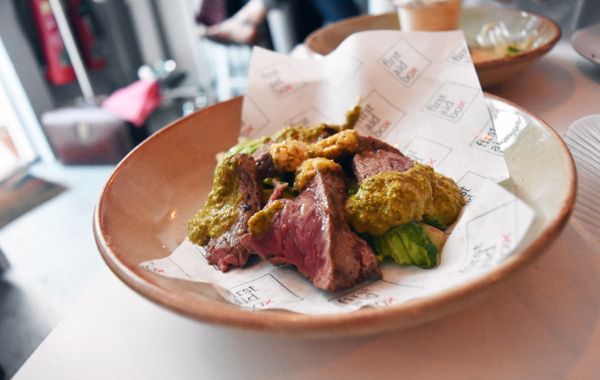 We also tasted a couple of desserts and boy, were we glad we did. Their vanilla ice cream was so velvety and creamy that it would have been just fine without the strawberries and lavendar. But the buttermilk… oh, the buttermilk! Creamy and almost panna cotta-like in texture and richness, it was the perfect end to a wonderful evening of food and drink. 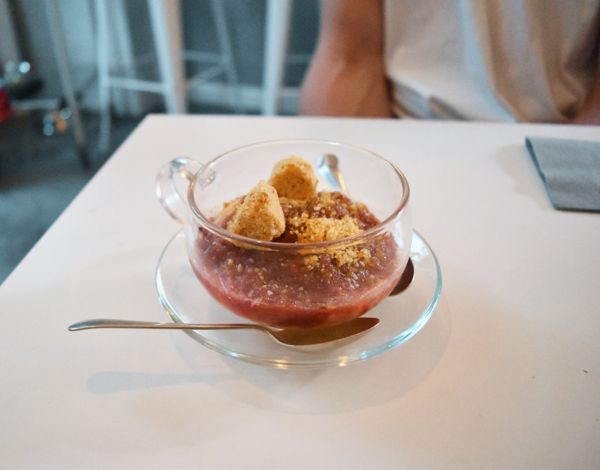 If you haven’t guessed yet, I’m a huge fan of First Aid Box and will definitely be heading back there. It’s so nice to see a couple of guys, totally into what they do, and doing a bloody great job of it.