Published this month, Up in Smoke is Peter Watts’s first book, but it’s not the first time the former Time Out features editor has become obsessed with London’s icons. With years of experience behind the scenes of some of the capital’s cultural landmarks unpicking weird and wonderful stories as a journalist, Peter couldn’t believe that the story of Battersea Power Station had yet to be told.

“When my publisher first suggested it, I thought ‘surely someone has already written this book?’. As soon as I realised that they hadn’t, it became my project. I knew it was something I could do as I’m a bit of London obsessive and had years of experience roaming around London gathering stories.”

Having begun to close down in the mid Seventies, Battersea Power Station was still operational until the startlingly recent year of 1983. Interested in both the “majestic, looming” architecture and the mystery of the building’s fate, Peter began work on a biography of the building, weaving together the stories of its past, present and future plans.

“After some initial research, I realised that this book would be one of two halves: firstly the history of the power station and secondly what happened after it’s closure. The second part, although historical, was built around tens of interviews with workers, architects, developers, planners, campaigners, politicians and local residents.”

One of the most memorable interviews Peter carried out during his research was with radical South London campaigner and Brixton muralist Brian Barnes, the artist behind The Nuclear Dawn mural. Peter tells me that Brian began campaigning in 1983 and has “seen off numerous owners and developers” with hard work and ballsy stunts, adding that when he asked Brian if he saw himself as “the conscience of Battersea Power Station” he disagreed, saying that he was “more like the jester”.

Many development plans have been argued over during the thirty-year debate. Ideas have ranged from the sublime to the ridiculous and included the development of a permanent circus, a racecourse, a theme park, a super casino and a football ground. At one point Michael Jackson was looking to buy the site to develop into his own self-contained fantasy world. Make of that what you will. 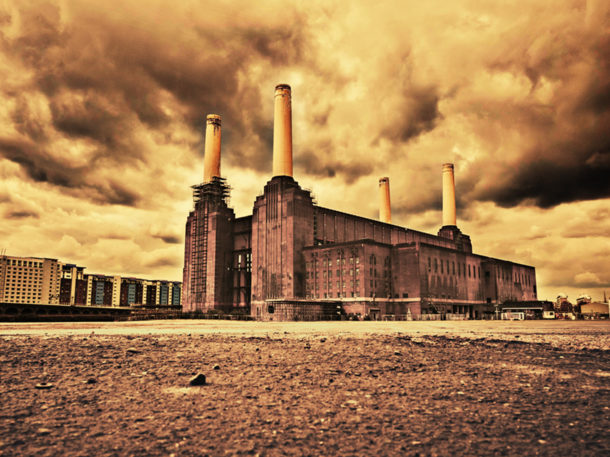 “I honestly believe that you can map the obsessions of London based on the changing plans for Battersea Power Station,” Peter tells me, “and that became my guiding principle as I put together the book.” Fads of the day aside, the battle has also been one of ideology, with a deep divide between plans to privatise the space and maximise profit, versus looking to invest in a public resource – “in a sense the book is about land and power and how those are divided and that makes it a very contemporary tale.”

Peter confesses that he finds the final outcome for the power station “quite depressing”. Having missed the moment to do something interesting in the early 2000s during the era of big public projects, he is saddened that the building will now become a giant shopping centre with luxury flats.

If Up in Smoke has one message for its readers it’s that London’s iconic landmarks mean many different things to many different people. Battersea Power Station has a rich history of being loved, loathed, feared and fought for by local people as it looms over them and will continue to be a bone of contention amongst all circles of Londoners.