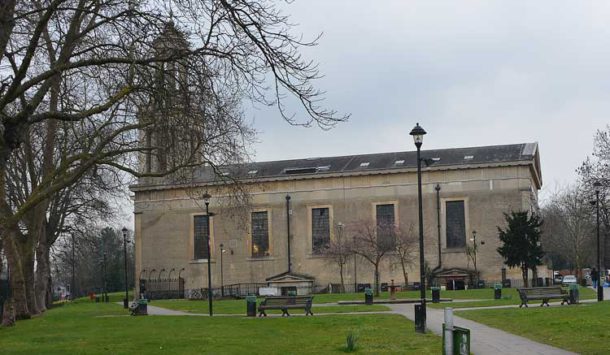 More affordable office space for creative businesses in Brixton is set to disappear as several tenants of The Brix, now housed in sixth floor offices in the roof of St Matthew’s Church, have been told they will have to leave by September.

The current issue of our sister paper the Brixton Bugle features a post by Julie Macauley of John+Pearl who moved to a studio in West Norwood from Brixton’s Bon Marché business centre because of an unaffordable rent rise.

“While Brixton gets design district status from the London Design Festival, the opportunities for start-ups and small creatives continue to shrink,” said one Brix tenant.

The Brix, a charity, was briefly the home of the Blog and Bugle.

It was set up in 1992 to fund the running of the church which was built between 1822 and 1824 and is a Grade II* listed building. This puts it in the top 6% of UK buildings of architectural importance.

But it needs many hundreds of thousands of pounds worth of repair and refurbishment.

The church and its crypt have been used for non-religious money-raising purposes since the mid-seventies.

Neil Gilchrist, who became a trustee of in January 2013 and was elected chair of trustees at the Brix last month, told tenants that the Brix faced a challenging time and that the trustees had to make “difficult decisions” on the way ahead.

The Brix had been struggling financially for some time and five years ago an architectural inspection had identified a large list of urgent repairs.

In April the vicar, Revd Stephen Sichel, announced that the parochial church council (PCC), which governs the church, had decided “to restore the vicar and PCC’s traditional relationship towards the governance and care of the St Matthews building” and to dissolve the Brix in late September this year.

The trustees of The Brix say it is run on an unsustainable business model because the costs of employing full-time security, a building manager, a bookkeeper and cleaners, together with other overheads, exceed the income provided by tenants and licensees.

They say they believe the best option for the church is to lease its fourth floor to a single tenant, giving it exclusive use of the building’s lift, toilets and staircase and responsibility for access and security – so saving money on staff. This means that offices and studios higher up the building would lose access and facilities.

The fourth floor and crypt – then containing club Mass and restaurant Babalou – were previously leased to a single tenant that went broke a few years ago owing substantial sums.

The Brix, a separate, non-religious entity intended to generate income for repair and maintenance, took over the management of the building through a 125-year lease from the diocese of Southwark when the church was at risk of being closed down and sold because it had become “redundant” – meaning that that donations from the congregation were not sufficient to maintain and keep the building open.