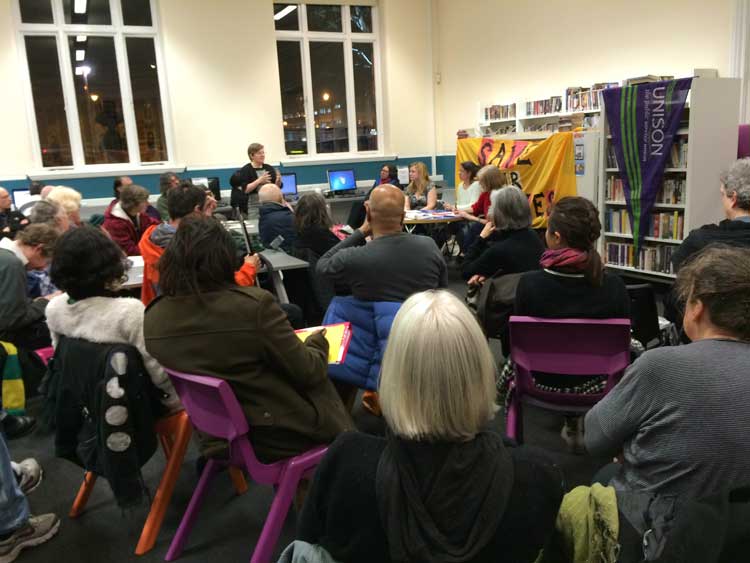 National Libraries Day, celebrating libraries nationwide Saturday (6 February) used to be called National Save Libraries Day. The library campaign in Lambeth plans to reclaim this name as it continues to battle the council’s plans to close libraries and transform some into gyms.

The council at its last meeting debated the alternative proposal, put forward a year ago by Susanna Barnes, head of library services. It proposes a staff-volunteer mutual trust which would ensure library services remain, while cutting spending.

The meeting took place ahead of the library staff strike on Monday, which council officials had sought to delay or prevent.

Laura Swaffield, leader of Friends of Lambeth Libraries told the meeting: “Saving the library service will be cheaper than destroying it. It’s so simple.

“Way back last April when they started the consultation, the head of services Susanna Barnes made a plan which would keep all the libraries running and make the necessary spending cuts. But Lambeth ignored this.”

Although the council is in talks with Barnes there has been no breakthrough and strike action initially planned for January will be held on Monday 6 February.

Ruth Cashman, of Lambeth Unison, said: “One of the brilliant strengths of this campaign is that friends of different libraries have refused to be divided against one another.’

“Our first day of strike action is on Monday. What happens after the first day depends on what the council do. We’re very willing to continue striking.

“So far people have done some fantastic work. The demonstration in November was brilliant, the people who’ve gone to Labour party meetings and stood up to councillors was fantastic.

“The council are so weak, their proposals are preposterous, you can’t find anyone who thinks it’s a good idea, they’re politically on the back foot because the campaign is so strong, and I think in the next ten weeks with a big push we could completely floor them and defend all ten libraries.”

Councillor Jane Edbrooke has been criticised for avoiding meetings with library campaigners, and stating that central government cuts are tying their hands. Lambeth’s defence against criticism of its policies has been that it faces ‘tough choices’ about what it can and can’t afford, due to cuts of 56 per cent of its budget. Library campaigners maintain this is not an adequate argument as the alternative plan would still make savings while maintaining the crucial library services.

Speakers at the meeting underlined the need to speak to Tooting MP and Labour mayoral candidate Sadiq Khan to get him on side.

Campaigners maintain library services are essential as study spaces for those who do not possess the room or technology to study at home, spaces for the elderly to meet and socialise, and learning spaces.

Tate South Lambeth library near Stockwell, which is threatened with transformation into a gym, runs services for the visually impaired which are award-winning and unique in Britain. Other services such as Portuguese classes and English as a foreign language are all run by volunteers.  Edith Holtham, head of Friends of Tate South Lambeth Library, says they would be unable to hold them in Kennington’s Durning Library, which has a far lower footfall as well.

The meeting ended with a decision to change the campaign slogan from  ‘save our libraries’ to ‘don’t steal our libraries’, to distinguish it from Lambeth council’s claim that its proposal will save libraries.

People with specific skills are being urged to step forward, to make campaign T-shirts and leaflets, and help organise the campaign.

Celebrities such as Joanna Lumley, who lives near Tate South Lambeth library, have already got involved with the campaign, and satirical cartoonist David Ziggy Greene published a scathing cartoon criticising the ‘gym-trification’ plans in Private Eye in November.

Find out more about the campaign here here, or contact your local library and participate in events for National Libraries Day (#NLD2016).

Radical Readers of Lambeth take on The Establishment