How far wold you go when your child’s future is at stake, asks Nick Buglione

It is a rare, and slightly troubling, day when I say to myself “That Giles Coren has a point”. Smugly sat behind his Murdoch paywall at The Times, our Giles recently went on a rant against the “middle class hypocrites” who have “stolen my daughter’s place at our local primary” and “forced” him to go private.

What Coren has highlighted is perhaps the principal obsession of the modern metropolitan parent, played out equally fiercely here in Lambeth – schools admissions and the predominantly middle-class, monied, manipulation of school selection. Primary or secondary.

I have three young kids in our local Catholic primary and, without even wanting to, am encouraged into the turf-war game, where people like me jettison any morals they may hold to go all ends up to get their kids into a good school, regardless of who they metaphorically trample over to get their way.

I have sat at Merlot-heavy dinner parties while friends tell me the exact yardage from a particular school gate they will have to buy or rent in to beat the school’s catchment and admissions criteria. I have listened while someone muses on whether anything from a nut allergy to a lisp gets their kid higher up the list, and even heard people objecting to new housing builds – including dedicated social housing – as it would make getting into the nearby school trickier. Any short trip onto Mumsnet forums shows the intensity of the debate.

For me, school admissions are like performance enhancing drugs in sport – you may not start out wanting to “dope”, but everyone else is doing it so you “must” join in. Except. of course, you don’t … but, of course, almost everyone does (if they can afford it).

I know strident lefties who forget all sense of equality when it comes to their kid. Did someone mention Dianne Abbott? The fact that out of the same mouths come expressions of outrage at the gentrification of Brixton’s railway arch businesses, is for me, highly ironic.

Lambeth schools decide admission on set criteria, in descending order – looked-after children; siblings of children in the school; children with exceptional medical or social needs; children of school staff and, last but definitely not least, distance (as the crow flies).

For a Church school, in our family’s case Catholic, it’s much the same with “Catholic” and “baptised” inserted and … wait for it … “the strength of evidence of commitment to the faith demonstrated by levels of attendance at Mass on Sundays”.

So it’s fascinating to see how Mass and liturgy classes swell around the time nursery or school places are up for grabs. And how many surprising conversions to the faith happen to the same timetable.

According to a recent survey, one in four families moves house to secure a school place and one in six say they have rented or bought a second property for the same reason. Of parents with kids aged four to 18, 5 per cent cheerfully admitted they had rented a second property (by definition temporarily) … which, by the way, is pretty close to fraud, especially if (or when) they decamp back to their nice big house in leafier areas once the first sibling gets in.

Camden has apparently seen parents using mail-drop addresses for applications. Vigilante parents (who didn’t get in) go feral to “out” the perceived fraudsters … it’s quite a battle out there. In most cases, proof of council tax payment and electoral roll registration is required, but even that can be played.

The result? Back to Mr Coren, arguing that there is no such thing as a good ordinary state school as they are artificially populated with “spoilt middle-class white kids”, that we have “selection by income through the back door” and that the middle classes have destabilised “the very notion of a local school by coring out the catchment areas and then abandoning them”.

While he sits all self-righteous indignation at The Times, some people, including those I know and like, could take a look in the mirror …

Nick Buglione has lived in Brixton, bar a five-year sabbatical in Peckham, for over 25 years. By day, a charity content manager, by night an occasional blogger at nickbuglione.com. 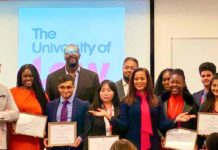 0
Brixton resident Orla Rawlinson, who turns four next week, is one of a team of 15 South...

0
Some good news in tough times – Brixton’s Traid on Acre Lane is still open. Simone Richardson looked in to see...