Brixton East will play host to Hard Dough, a unique art auction and fundraising event which aims to help victims of domestic abuse, on Wednesday 18 November.

Rather than raise money directly for Solace Women’s Aid, event organiser  and artist Imogen Paton hopes to be able to provide a continuous source of income for the charity, by renovating, decorating, and then hiring out a rare Chevrolet Impala, which will be the UK’s first charity art car.

An art car is a car which is used as a canvas or platform for artistic expression.

This particular car, which will now be used for Imogen’s Bad Karma Impala project, already holds a deep association with domestic violence for her.

“I was encouraged to buy the cars by my ex partner who convinced me that we would make a successful rental business with them,” she said.

She added that her story illustrates the way in which domestic abuse permeates through many facets of life, and is not just limited to physical violence.

“In terms of the artwork, this man controlled that too.

“He had never before picked up a paintbrush, yet he saw fit to paint all over my work changing its appearance and direction.

“The exhibition of the paintings to be auctioned aims to present a different light on domestic abuse, showing the various forms abuse can take.”

The classic car seemed to have met its end when Imogen’s abuser crashed it badly.

“He took the Impala one night when very drunk after a course of dramatic events and ended up smashing it to pieces.”

Found with its original Idaho licence plates, the car became the centre of a media frenzy earlier this year, with speculation that it had been stolen and then smuggled out of the United States.

After escaping the abusive relationship, Imogen decided to turn the car into an art car, the first built for charity use in the UK.

By putting the car to good use, and by selling off artwork she made with her abusive partner, she wants to inspire hope in other victims, showing them that however badly they feel damaged by abuse, they can recover.

The damaged and as yet undecorated car will be on display on Wednesday.

The event will also feature a baking competition, classic car quiz, live music, and of course an art auction.

A preview for the auction will take place at Unit 16 in Brixton Indoor Market on Thursday at 7pm, with live music. 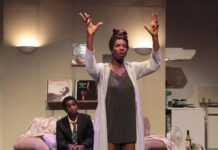