Brixton resident Amelia Viney is getting young people all fired up about things.

These aren’t your usual A-Level students. They have a passion and a mission, and an understanding of the hard work required to change things in their lives and those of others.

Jemmar, John-Paul and Jessica are three of the students selected to take part in the Advocacy Academy – a social enterprise which teaches students how to campaign on issues close to their hearts, giving them the confidence to make their voice heard.

The Academy is a series of workshops throughout the year, in which students are presented with experts in certain fields, and taught how to debate and discuss important and topical issues.

The students made use of new-found speaking skills by preparing a speech for Helen Hayes, MP for Dulwich and West Norwood, which they delivered to her in Parliament.

Jessica, who attends Lilian Baylis Technology School, chose to champion mental health. She was made aware of the issue when the recently shut Kids Company diagnosed her with anxiety. She aims to improve awareness of teenagers’ mental health locally and nationally. She was scared her anxiety would take over as she made her speech to Ms Hayes, but she succeeded.

“The Advocacy Academy has brought me so much self-esteem, and the power and ability to talk confidently and stand up for teens’ rights.”

Jemmar Samuels, 19, who goes to Chestnut Grove Academy Sixth Form, is challenging the mainstream representation of women of colour. Born in Brixton, she moved to Jamaica when she was 12 and in the four years she spent there she discovered the extent of the beauty standard against blackness.

“I got compliments from people as soon as I started bleaching my skin, but I felt crap, it felt so wrong and made me so angry. When I came back here I realised you can like your natural hair.”

She then got into black feminism and intersectional feminism, which encourages discussion of gender alongside race and class. Jemmar says: “I get free school meals and a bursary to go to school, but in some countries it’s against the law for women to attend school! That’s what intersectionality means to me – awareness of your privileges as well as your disadvantages.”

She found out about Advocacy Academy through her work with Young Lambeth Cooperative, and knew immediately it was for her. In the groups she is able to talk and debate, even though she says she’s used to being shut down. “At school, people say ‘Jemmar’s so political!’ – and I just think why aren’t we all political? I’m tired of being seen as weird for being politically engaged.”

John-Paul is from Lough-borough, and wants to be Prime Minister. Far from being intimidated by the exclusive atmosphere of Parliament and the BBC’s Question Time, he sees it as an inspiration to change it. “A lot of people go into politics because they want to be a politician,” John-Paul says. But he wants to join Parliament because he’s passionate about changing things.

Joining the Labour Party, John-Paul attended events and applied to the Advocacy Academy when he found out about the opportunity.

His speech in Parliament was about funding opportunities for young people in Lambeth, and for the Advocacy Academy to continue. “Young people with potential just end up hanging out, and their biggest dream is to become a rap star!” Jean-Paul says.

Raising awareness of politics in schools and creating campaigners, is the vision of founder Amelia Viney – American-born and a Brixton resident. She aims to get young people fired up about political issues affecting them, and trained to campaign effectively.

“Anger is good,” she says. All too often anger is seen as a flaw, whereas it’s actually, channelled in the right way, a weapon to change things.

The next Advocacy Academy meeting, in November, is about race and feminism. “I can’t wait for it,” says Jemmar. “When Amelia said this was going to be the theme, I was like ‘this is my event.”

This is the second year of the Academy with 16 pupils, up from the 12 last year.

Amelia’s ambition is to have 25 next year.

The Advocacy Academy is looking for funding from Lambeth businesses and meeting space in which to hold its workshops.

A year at Grove Adventure Playground 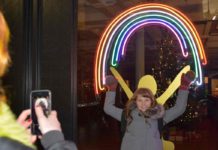 Winter Windows at The Department Store