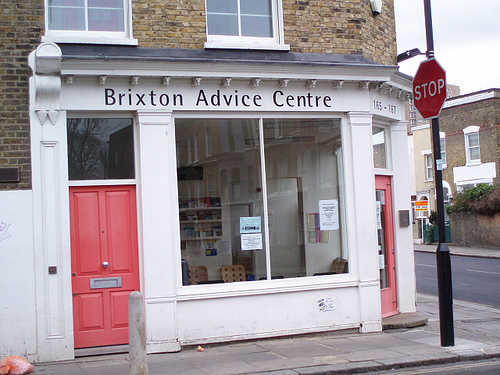 A visual tribute to Railton Road and inspirational figures, like Darcus Howe and Linton Kwesi Johnson, was launched at the Brixton Advice Centre last week to coincide with Black History Month.

The installation in the windows of the Centre, created by local designer and artist Jon Daniel, pays homage to the building’s cultural heritage and and a selection of local heroes who have had historical links with both the building and the road it sits on.

The building was home to the production team behind Race Today, a seminal magazine discussing racial politics in the ‘70s and ‘80s.

The publication was inspired by the thought of Trinidadian theorist C.L.R James, who died while living in the building, and who is honoured in the installation, alongside Winifred Atwell, Darcus Howe, Farrukh Dhondy, Linton Kwesi Johnson and Olive Morris.

Many of those honoured, and other influential figures associated with Railton Road, were present at the launch event, which featured speeches and poetry readings.

Speaking at the event, Leila Hassan, who succeeded Darcus Howe as editor of the magazine, described the part the building and its occupants had played in the Brixton Riots and the struggle for racial equality in the UK.
“Our history is the history of Brixton,” she said. “I hope that one day we have the opportunity to tell the story of this building and what it did for the freedom of black people in this country.”

You can’t change change. But it must be managed