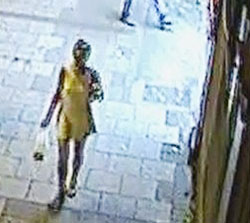 Metropolitan Police sexual offences exploitation and child abuse command officers are appealing for help to identify a woman who may have information that they say will assist their investigation of a rape in Brixton.

The woman, who is white and believed to be aged in her mid-20s, was wearing a light coloured dress.

She was captured on CCTV (right) going into Morley’s Chicken shop on Brixton Hill, SW2 at 02.39 on Sunday, 2 August.

As she came out of the shop, she was approached by a man with whom she walked up Brixton Hill towards Streatham.

The woman may be able to help detectives investigating an allegation of rape committed nearby later that morning.

A 21-year-old man was arrested on Tuesday, 11 August and charged with rape. He has been remanded in custody until 11 November.