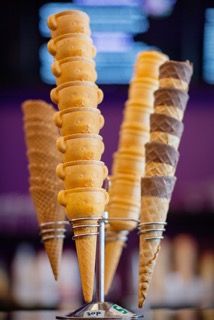 Eagle eyes amongst you will have noticed Cherry N’ Berry is actually in Streatham Hill but we wanted to compare its ice cream and waffles with our local offering at Creams so sent Peter Wiggins along to see if it’s worth a visit.

The ‘ice cream parlour’ is an American institution, and we don’t go for ice cream’ much in London. But maybe we should. There’s certainly an enjoyable, if also rather unusual, place to do so in Streatham Hill by the name of Cherry N’ Berry.
Cherry ‘N’ Berry is perhaps most noticeable for its purple frontage. If you think you may have zoomed past it on a bus … Yes, it’s that purple one. It’s very purple, like a berry or a cherry in fact. 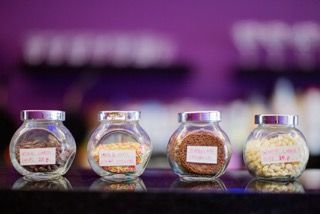 Cherry ‘N’ Berry is well located for a foodie: sandwiched between two excellent grocery stores – The Med Deli (with adjoining bakery and butcher) and Fresh Daily Foods. Both are also just a stone’s throw from the excellent Italian restaurant Addomme. Having lived in Streatham Hill for two years I have grown very fond of a trip to Cherry ‘N’ Berry. I encourage you to visit.
For all of my fondness though, I sometimes like to imagine visiting it with Gordon Ramsay, and it would be a ‘kitchen nightmare’ for sure.  Ramsay’s screwed-up face would screw itself up still further as he tried to navigate a menu which goes on and on and on. It’s not just ice cream for sale – there are crepes and American pancakes and waffles and cakes and sandwiches and toasted sandwiches and sundaes and sorbets and chocolate bar milk shakes and ice cream milk shakes and fruit smoothies and lassis and cookies, and quite a lot more besides with many many variants of each.

‘This place is f**king confused’, Ramsay would say. ‘Where the f**k am I?’
Then he’d move on the décor. ‘What the f**k is going on here?’ he’d say, as he examined the chunky purple wall hangings that float pointlessly above his head. ‘And why is it all f**king purple?’ He’d be asking this question repeatedly as he gazed at the huge menu.
Perhaps all this makes it sound as if Cherry N’ Berry is failing dismally, which it really isn’t. It’s seldom empty and it’s something of a family friendly hang-out. The proof, as they say, is in the pudding. There are no less than twenty-one favours of ice cream. The bright blue bubble-gum is not for me, but the cookies and cream (or biscotti) is splendid and so is the salted caramel. They’re both sweet, and rich, and they taste like proper ‘gelato’ to me and when I ask, I am assured that they are all indeed procured from Italian suppliers.

The sorbets are tasty too. I tried the mango and the passion fruit, both delicate, sending a shiver down the spine as sorbet should. Feel free to turn use your 21 flavours of ice cream into some kind of sundae. There’s all the sauces, cream, fruit and sprinkles you could ever want to build your own. Go to town!

The crepes and the American pancakes are well worth trying too: they’re freshly made for you and, like everything else, they’re piled generously with… anything you want to try.

And what about the waffles? I reckon Ramsay would describe them as ‘f**king delicious’. I agree with Ramsay. For my money, the waffles at Cherry ‘N’ Berry are the star of the show. They’re freshly made, light, fluffy, the perfect complement to the excellent ice cream. 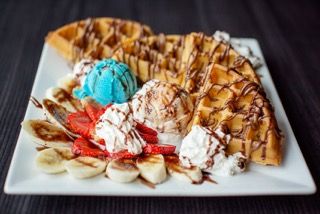 Vanilla ice cream is especially good with them, but take your pick. Strawberries will work well too, and you will likely want some maple syrup on there too. In my opinion they aren’t enough waffles in the world. But what’s also true, is that most of the world’s waffles aren’t nearly as good as this.

So it’s great that the portions are colossal. Get them to share or get a ‘half order’, unless you are really really hungry. I like Cherry N’ Berry a lot. It’s not my idea of a kitchen nightmare at all…

Let us know where your heart lies: Creams or Cherry N’Berry or do you know another waffle joint in the area?

Thanks to Orlando Gili for the use of the photos. More of his work can be seen here.