The first and last time I saw Beirut perform live was at the Green Man Festival. A breathtakingly beautiful performance in the midst of the Brecon Beacons. I have been waiting for the opportunity to catch them live again and jumped at the chance when I saw the Brixton date appear. I was a little concerned that it would be hard to top them playing within the festival vibe, but as soon as they began their opening song my fears were allayed.

The atmosphere in the academy was full of joyous anticipation. With four years between the release of their last album ‘Rip Tide’ and the latest recording ‘No No No’, fans were eager to hear old and new material live.

The much loved sound incorporating shades of gypsy dance rhythms, swaying romantic vocals, shockingly powerful horn blasts and the all important underlying indie vibe was interspersed with new songs that have built on the already multi-layered music with a more electronic, synthesised edginess.

The set lasted for an hour and a half and Zach charmed the crowd throughout. Every time I looked around the venue I saw a sea of dancing, smiling people. This is a band that is hard to stand still to.

Playing ‘East Harlem’ early in the evening was a real crowd pleaser, and made it tough for me to resist the urge to dance while trying to take photos in the pit. Other favourites included ‘Santa Fe’, ‘Nantes’, ‘In The Mausoleum’ and of course ‘Flying Club Cup’.

We were also treated to seven of the nine tracks from the new album. All this interspersed with some wonderfully mumbled banter with the audience. At no point did I manage to make out what Zach said as he chatted to the room, but he said it all with such beguiling charm it didn’t seem to matter.

The highlight of the night for me was the power of hearing the incredible mastery of the horn playing. With Zach Condon on trumpet, flanked by the immense talent of Kyle Resnick, also on trumpet, and Ben Lanz on Trombone – the sound lifted every song to another level.

This was no more so than the spaghetti western passages that seemed to have the whole academy entranced. I couldn’t help but make comparisons with the beautiful soundtrack from this year’s cult hit movie ‘The Girls Who Walks Alone at Night’.

The support act should also be mentioned, including Beirut band member Paul Collins’ heartfelt introduction and plea to the crowd to be sensitive to the nature of this quiet acoustic sound and request to keep voices low.

Tigana Santana is a Brazilian singer with Afro-Brazilian roots. This compelling mix of culture oozed hypnotic rhythms and mellow vocals through the room like warm syrup. Tigana was also accompanied by constantly smiling percussionist. I will definitely be investigating more of his music. 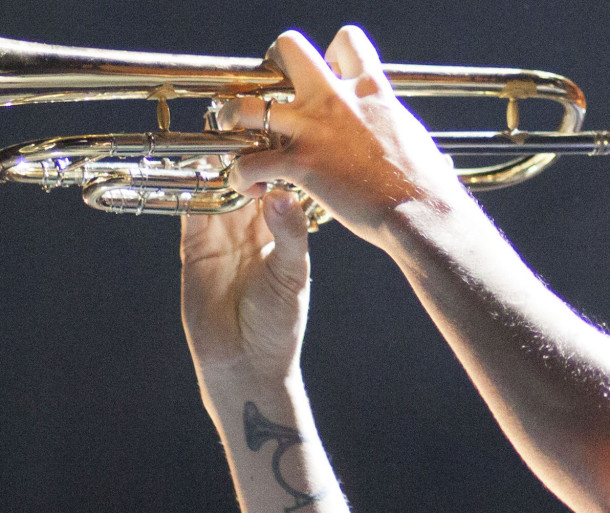 Despite a 21 song set, including a four song encore, the evening seemed to be over in a flash, and I was left wanted more. On leaving the academy an overheard conversation lead to two girls from the audience declaring the love for Zach over their current boyfriends. I think most of the room left with exactly the same emotion.

Check out all Petra’s photos from the gig in the album below.