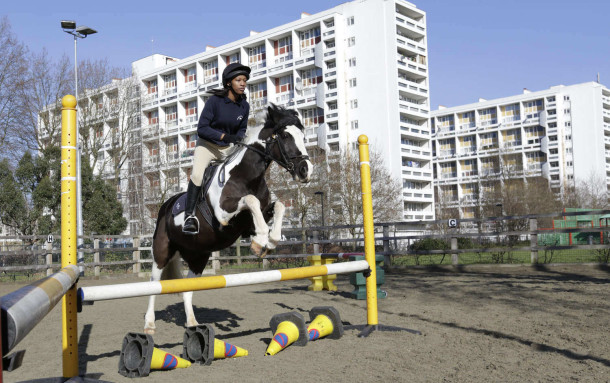 Sandwiched between tower blocks and a railway line is not the most likely place find horse-riding stables, but then Ebony Horse Club in Brixton is not your usual pony club.

Since it opened in 2011, Ebony has been teaching young people in Brixton’s Coldharbour Ward, one of the most disadvantaged inner city neighbourhoods in the country, to ride and take care of horses.

This summer has been the club’s busiest: they erected a climbing wall and were visited by Olympic medallist Ben Maher, while also continuing with their regular lessons and holding summer riding competitions.

Letty, the Engagement manager at Ebony, says they brought in the climbing wall so they could reach even more children. She says it is more than just “a place to learn to ride.”

“We want to see progress from the children – and a commitment. It can take a few years but one day it just clicks, they really benefit from what riding and its responsibilities can bring. Some of the children who come here have been brought up in a really difficult environment: from overcrowding at home to parents with drug and alcohol abuse problems. We want to give them a safe place to be but also something more: we want them to put their skills to use.”

When the charity, which had been running for 19 years, arrived at Millbrook Road they had to excavate thousands of needles before it was safe to set up but now the atmosphere couldn’t be more different.

Young people are not just taught how to ride horses but also how to care for them and to work in the stables. They often go on on residential trips, recently a group travelled to Gloucestershire.

They are also given the opportunity to study for qualifications, such as a BTEC in Horse Management, and take British Horse Society exams. Shanice, 19, has been involved with Ebony since she was eight, she currently works as a groom in the yard and is completing an Equine Studies Foundation degree at Plumpton College.

Safia, 13, said: “There’s something about being around horses. It’s just really calming and when there’s stuff going on at home you know that people here will listen.”

Letty says it’s a precarious time for the charity. It is in its fourth year and they are working hand to mouth. They receive donations from places like Sport England but funding is always precarious. Letty says it would be “devastating” for the community if Ebony was forced to close, as so many young people have come to rely on it.

Laura, 14, explained: “Ebony Horse Club means a lot to me. There’s always someone to talk to and you know that you won’t be judged by anyone, including the horses!”

Big welcome from a small horse

See Pedro at the Lido