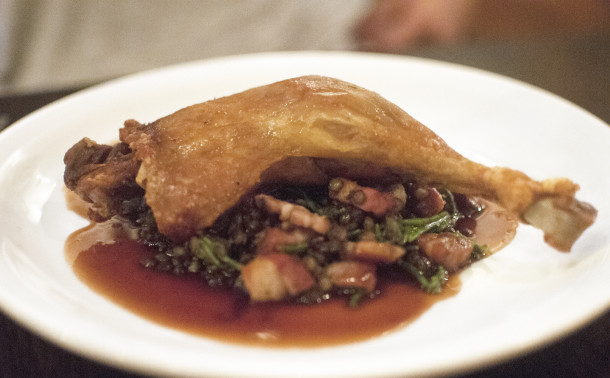 I’ve always loved Herne Hill and found, for its size, it to have a healthy number of good standard hangouts to head out in for a bite. Milkwood, situated in the premises of the former Escape Bar, is the latest newbie complying with that expectation. The bonus is that it’s got a cracking cocktail list to boot, which I’ll be heading back to try on a non-school night.

It’s in prime real estate, in direct line of site from the train station and has a small outdoor area to keep the smokers and al-fresco evening chasers happy. It looks inviting.

Unfortunately, that feeling was squashed when I walked in and replaced with one of deflation. It was just a bit lifeless. OK, it was a rainy Monday evening, but there was only a scattering of people inside the whole place, which in fairness is a pretty big space to fill. The decor is dark and woody and I can see what they’ve tried to do in going for a simplistic look to match their ‘simple’ menu, website and logo, but I think it’s lacking something in the atmosphere department. I have heard it’s much busier at the weekend, but being only three months old I expected more bodies, more energy, more va-va-voom.

I’m happy to say – the food is another story. There aren’t many local places which are brave enough to pride themselves on offering ‘simple classics’, but that’s just what Milkwood does, and they do it rather well.

To start, we ate burrata with parma ham and grilled peach. The plating was elegantly elementary allowing the three components to shine all by themselves. The ham was very good, the other two better. The peach was perfectly grilled, giving it a slightly more sound structure and making it the perfect yang to the ying of the soft and creamy burrata. This starter seamlessly compliments their ethos of simplicity. The subtle drizzle of olive oil, dusting of rock salt and flashes of basil round it off perfectly and we were gutted we’d shared it. 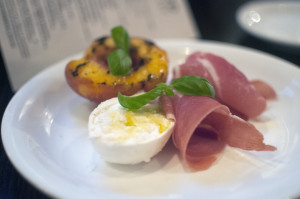 Not to fear, mains were almost here. My sea bass arrived amongst purple potatoes, chorizo, several delightfully different coloured heirloom tomatoes, an avocado purée and aioli. Their presentation is faultless – it’s the kind of thing you see on MasterChef and try to recreate at home, only to end up with what looks like an off-shore garbage dump. But the chefs at Milkwood have nailed it.

I’ve only ever tried purple potatoes in European countries in crisp form and I’m always happy to be able to sample something new. Milkwood’s fresh version, I’m glad to say, is much better. They’re slightly more vegetable tasting and much lighter than regular potatoes. This dainty dish is exceptionally well balanced – there’s just enough of everything. The chorizo adds a depth of flavour which is cut through by the freshness of the tomatoes and avocado (which, by the way, is perfectly pureed and as silky and creamy as a fine Italian gelato). The crisp of the sea bass skin is extremely satisfying and delicious when dipped into the dreamy aioli. 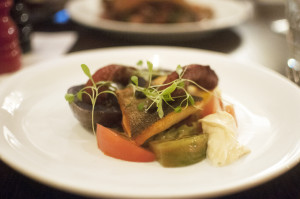 I have to say I was a little jealous of the size of my friend’s choice as it arrived, though by the end we were both definitely satisfied. Confit duck leg with samphire, lentils and lardons is warm, hearty and homely. It took me back to being a child, growing up in Yorkshire and going to the fancy pub in the fancy nearby village for a family member’s birthday. And that’s a great compliment – Yorkshire does this kind of cooking properly.

The golden duck leg was simple but charming. The crispy rendered fat against the succulent duck meat is making my mouth water just thinking about it and the gravy engulfing the lentils was rich and full of umami flavour. Rounding the whole thing off are the lovely luscious lardons, which serve a dual purpose of seasoning the dish. If I were to be picky, the flavour of the samphire got a bit lost.

The biggest surprise about this place is that it has, lurking in its basement, a cinema with seats for 20 people and showing daily modern and classic films. At just £5 a month for you and a guest, it seems like a great deal – especially if you order in one of their cheeseburgers.

Would I go back to Milkwood? Absolutely, but I’d probably wait until Thursday onwards when I expect there’s more of a buzz. I’m really willing this place to succeed as the menu is excellent and the food really is very good.

Nikki is the Brixton Bugle restaurant critic and this post first appeared in the September 2015 issue. She is on Instagram at n_griffiths.

Labour continues to dominate Lambeth council, but has a new Green...