Thousands of people descended on central Brixton for the tenth Brixton Splash on Sunday for an afternoon of live music, spoken word, Caribbean food and craft stalls. Much has changed in Brixton over the past ten years, so what does Brixton Splash mean in 2015?

The festival is organised by the not-for-profit organisation of the same name, which during the rest of the year delivers an outreach programme for people disadvantaged and excluded within the community.

Sunday’s event was loud, inclusive, busy and chilled out all at once, as crowds descended on Windrush Square for the main stage and food, and St Matthew’s Churchyard for a spoken word area and craft stalls.

But there are those who feel the festival has lost its way, and doesn’t have a point to it.

Ras-Dlo Levi, who moved to Brixton in the 1980s from north London and is from St Lucia originally, felt the early days of the event had a stronger sense of cultural celebration.

“It gave us an opportunity to build up our businesses and network, and for a joyful celebration of Afro-Caribbean culture. But it’s not representative of our community any more. We’re not represented in the businesses here and I don’t feel we’re really expressing ourselves.” 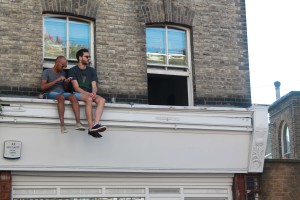 It is difficult to organise any event on a large scale, and those behind Brixton Splash have the challenge of drumming up interest in a changing area caught up in the midst of a regeneration versus gentrification debate.

The changing residential make up was evident at Brixton Splash, as it was at the Lambeth Country Fair a few weeks earlier.

That said, Brixton’s heritage is a massive draw for those who come here from all across London to experience Splash and other events.

Joanne, 24, from Islington said: “I came last year and it was really fun. It seems a lot bigger this year, and a lot busier.

“It’s a big mix of people and different cultures. Everyone’s joining in with the same aim of having fun and chilling. It’s just a good vibe.”

Cindy Theodore, 38, who lives in Clapham Junction was at Splash selling baby clothing and accessories from her business Maman Gateau. “I don’t know much about the origin of Brixton Splash, just that it’s run by volunteers, which is a big thing because they’ve put on an amazing event.

“Brixton is a mix and that’s what it’s about. I see people here and I’m surprised to find out they live in Brixton. That’s why people like the area – the mix of people.” 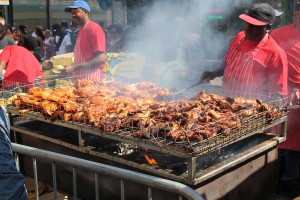 Brixton Splash today is more about bringing the cultural heritage of a diverse area to a changing audience. The fact that it drew such a huge crowd this year shows the strength that still lies in Brixton’s history and the Afro-Caribbean community.

Today’s young residents, whether born and bred in Brixton, south London or Brixton, Devon may not know or care if the original event was more focused on the needs of the Afro-Caribbean community then than about promoting the lighter aspects of its culture to a new audience.

What matters is Splash can still draw a diverse crowd out to celebrate a community which has played a hugely important role in shaping an area, promoting cohesion and alliance along the way.