Last week True Cost, a hard-hitting documentary about the fashion industry, was shown at the Ritzy at a screening hosted by Kate Richards, owner of The Keep Boutique in Brixton Village. Arts writer Brian Walters caught up with her to find out why she wanted to put it on. 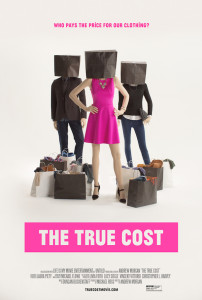 Documentaries showing in cinemas are more popular than they once were, though still something of a risk, competing with blockbusters, comedies, thrillers and more. If it’s a big company distributing a doc, they’re used to the risks. If you’re an individual who doesn’t work in film but decides to host a doc screening, it’s rather more daunting.

Back in May, Kate, who runs the ethical fashion shop ‘The Keep Boutique’ in Brixton Village, saw the documentary, True Cost, at a preview screening at the Clapham Picture House.

“At the Cannes Film Festival there was quite a lot of noise about True Cost,” says Kate. “It’s a crowd-funded film so social media is very powerful in that respect. I found out there’d be a Q&A with director, Andrew Morgan, at Clapham and immediately brought a ticket.”

The documentary, True Cost, is an investigative look at the fashion industry and its damaging global impact. When we consumers pop into a store to buy clothes, usually the last thing on our minds is who made them, what are the working conditions, is there an environmental cost, or where was the fabric sourced? True Cost looks at all this, travelling from Cambodia and Bangladesh, to China and Uganda, with footage and interviews from a wide variety of people involved in the industry, designers, factory workers, economists and more. It’s a revealing and thought-provoking film about something that we as consumers are all a part of.

“When I was watching the film I found it so powerful I thought I really want my friends and family to see it, to understand why I’m so passionate about what I do,” Kate told me. “At the Q&A, I spoke to director Andrew Morgan, told him about my shop and said people need to see this film, and he suggested I host my own screening. So I remember walking home after thinking, ‘I’m gonna do it. I’m gonna contact the Ritzy tomorrow and push for this film to go ahead.’”

On Monday 3rd August at 6pm, Kate’s plans did go ahead, as she hosted a screening at the Ritzy, though not just for friends and family. 70 tickets were sold, with a portion of the ticket price going to the charity Brand Aid, which raises funds for the Nepal earthquake recovery appeal.

Kate was inspired to open The Keep Boutique after she attended an ethical fashion forum at Sadler’s Wells back in 2012. The store sells a selection of ethical fashion brands, including Komodo and People Tree.

“I think people are becoming much more aware about where clothes come from and also the quality. I think that’s what really gets people when they come into the shop. You can feel that the materials are different.”

Ethical fashion stores with a physical outlet are very rare. Most of them only operate online due to rents and the changing nature of shopping, but films like True Cost are helping to change shopping habits. A key component of those habits is fast fashion, which encourages excessive consumption.

Kate’s has her own shopping philosophy: “Buy less and buy better. Don’t buy so much, don’t see it as disposable. See it as something that you buy and you treasure and you love.”

True Cost is available on Netflix. See what Kate stocks at The Keep Boutique on her website.