Arts writer Brian Walters met Gil Doron, the artist behind the exhibition Gini in a Bottle currently at Upstairs at the Ritzy.

An exhibition inspired by social protest is currently showing at Upstairs at the Ritzy cinema until 3rd August. Local artist, Gil Doron has been making both provocative and community based art for many years, and is passionate about investigating social and cultural issues in his work. 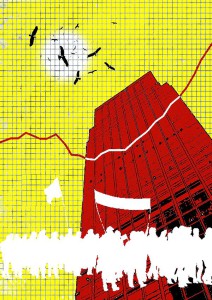 The title of the exhibition is Gini in a Bottle, and it was originally shown at Studio 73 in Brixton Market. The ‘Bottle’ in question is a Molotov Cocktail.

“With Gini in a Bottle the question I’m playing with is, is it an art object, or is it an object of protest?” he says. He calls his work ‘transgressive art’.

“The notion of transgressive art is to look at certain environment, political, social, arts or economic environment, see what its boundaries are, and explore them.”

Gil was born in Clapham to an Iraqi father and Bulgarian mother. They moved to Israel in the 60’s where Gil became a lecturer in architecture, though he was always interested in how art, architecture and space interacted.

Moving into community art, he worked with Palestinian teenagers, the elderly, Ethiopian groups and many others. 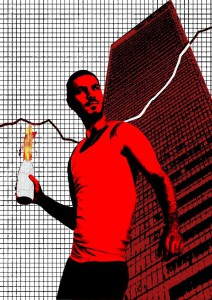 “The Gini in a Bottle project started with me distributing Molotov cocktails in the centre of Telavi. Policemen arrived to arrest me.” Luckily a well-known curator explained to the police the bottles were similar to a sculpture, and Gil avoided arrest.

“It was a street intervention and the bottles were art objects. It relates to actions by the Black Panthers in Israel in the 1970’s. They were Eastern Jews or Arab Jews from muslim countries that emigrated to Israel. They were protesting against discrimination and racism.”

He organised an exhibition about Palestinian homes in Jaffa, which caused controversy with the authorities, who stopped his funding. It was then he decided to leave Israel.

“I identify with the multicultural nature of Brixton. I feel much more comfortable here.”

Gil’s passion is working with communities on art projects. He’s worked in schools, care homes and universities, and loves the interaction, discovery and shared goals of communities.

More of his work can been seen at www.a4community.com

Back Brixton for bargains