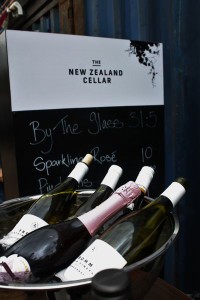 By Regine Lee
If there has been an overarching trend in London’s food scene in the past three years, it’s the growing number of restaurants that focus on only one thing. The restaurant scene has been splintering into waves of specialist hipster obsessions – cereal, ramen, polenta, macarons, and whatever else is the carb/meat/pudding du jour. Never have Londoners been faced with so many choices for places to eat on the one hand, but given such terse menus on the other.
Wine bars and shops have followed suit. Riding the wave of uber-nerdom in the food/drink world, you can do a Tube stop bar crawl across places selling only natural wine, or focusing on the Loire Valley, California, South Africa, or Porto and have a pretty heavy night. And now, if you were keen to explore the wines of a far-flung island country in the middle of the southwestern Pacific, you’d go to London’s only New Zealand wine specialist shop – Brixton’s own The New Zealand Cellar. Run by Melanie Brown, a Kiwi living in London for the past 10 years and located in Pop Brixton, the container park project down Brixton Station Road, the shop officially opened late May with the launch party of the new retail area.
Melanie decided to take a risk and make an investment in putting New Zealand wines in the retail front line when she made the transition from having an online-only business to establishing a physical shop. The New Zealand Cellar coming into Brixton has not been without controversy. There has been debate about the purpose and intentions of Pop Brixton as a commercial space in the community, and the wine shop’s place within it, covered by a series of articles in Brixton Buzz.
The article suggests that her shop was crowd-funded by a group of international investors, implying an access to wealth that puts her at an advantage over other upstart businesses. However for me, it’s worth taking a look at who those investors actually are. They’re restaurants, wine importers, wine journalists, and a list of wine producers from New Zealand who all believe in Melanie’s concept and want to see her grit and passion for New Zealand wine succeed as a business. These aren’t giant corporations or soulless promotional bodies looking for a quickie investment.
As Melanie says of opening her shop, “I’d always had it in my sights, as I wanted to get in front of customers and really get the stories of the vineyards across, and you just can’t do it as well online. There’s nothing like having the face-to-face interaction with people and really understanding their needs and tastes.”

Having been told about Pop Brixton space applications by a friend, she discovered it was a way to finally realise her dream in a way she could afford, and found herself with a successful application earlier this year. And as Dorothy was blown into Oz, she was swept up in an unexpected whirlwind and plonked in a strange and colourful place full of sceptical locals.

Despite the differing opinions about gentrification in Brixton, it’s undeniable that it impacts established businesses. Several old school veg sellers and hairdressers lost their space in Brixton Market when places that hip, young things like started moving in, and the ongoing campaign to save Brixton Arches shows just how close to the bone the rising desirability of Brixton real estate is in affecting what is a socioeconomically diverse area. Lambeth council could certainly do what it can for long-standing Brixton businesses who contribute more to the community than their rental cheques would indicate.

However, Brixton is also a really entrepreneurial area that champions new ventures and gives them an opportunity to cut their teeth. Melanie says that a key part of why she was able to open was that the entire Pop Brixton area is covered by a full alcohol license. You can purchase wines by the glass and drink wherever you’d like in the boxpark, or buy whole bottles and Melanie will provide you with plastic glasses. In a fairly radical move for a wine retailer, she does not charge an extra corkage fee for this, nor does she price her wines by the glass proportionally more than if you bought the full bottle. Her intention is to encourage people to try new wines and to experiment a bit. This boldness is something to support and celebrate.
And what of her wine? As a generalisation, with the country’s smaller number of wineries and producers, wines from New Zealand are relatively more expensive on average, and not as far-ranging in style of those of its bigger cousin Australia. However, what it lacks in volume, it makes up for in quality. No vast lakes of cheap, nondescript wine here. New Zealand put its stamp on the wine world through its distinctive Marlborough Sauvignon Blancs, which take on intense lime, passion fruit, and peapod flavours. For red wines, the country is known for its lush, cherry-scented Pinot Noirs. New Zealand is gradually branching out to producing wines from other grape varieties, though, and there are a few more niche varieties dotted on her shelves. Generally the common link between most New Zealand wines is a focus on restrained but pure fruit flavours. You won’t see blowsy, muscular wines but something more refined on the whole. Guzzling them would be missing a trick, and getting the most out of drinking them entails paying a bit of attention.
Speaking about how New Zealand wine can stand out from a crowd, Melanie says, “The whole ethos of the community of the New Zealand wine industry is that the community works really hard to uphold their reputation. There are pockets of winegrowers who are focused on quality and the environment and get together several times a year to look at how they can improve, share equipment and create a communal stewardship of the land. Being forward-thinking and working together really contributes to their reputation worldwide”.
Having reviewed its wine selection and prices, the New Zealand Wine Cellar isn’t the place to go to grab a bottle of cheap booze. But, it absolutely is a place where you can go to learn a lot about wine, attend some great tastings led by New Zealand winemakers themselves, have a chat with Melanie and her colleague Rosie, and be prepared to spend a bit extra on a bottle or a glass to drink there which will no doubt be delicious.

Regine Lee is a wine writer and educator living in Brixton. Follow her on Twitter at @RegineMLee or check out her blog http://spilt-wine.blogspot.co.uk/
Note: I work for Liberty Wines, a UK wine importer/distributor, but my views are entirely my own

It’s the day for a bagel beer in Brixton