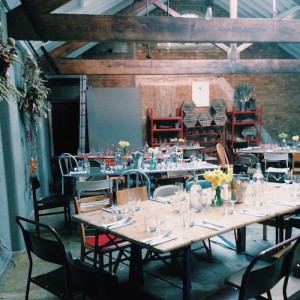 Originally starting small last November, pop up restaurant Beehive Place has surpassed all expectations, both theirs and Brixton’s, and has extended its run weekly until the end of June. So while you can still grab a few tickets for the last few nights, Brixton Blog went along to speak to the chefs and hear how things have gone.

Everything about Beehive Place is low key and understated but well thought out. You could walk past the door of the building if it wasn’t for the yellow paint and spray painted bees on it to single it out. Chef Sam Hodges opened the door to both me and the postman at the same time and showed there was no ego as he chatted about seafood to both of us. Upstairs, I had a chance to take in the beautiful converted hayloft in bright sunshine as the chefs came to say hello to me and the forager who had just arrived with bagfuls of herbs and plants from Sussex.

Sam and his team are first and foremost interested in quality and provenance, using their run in Brixton as a chance to highlight the variety of produce all areas of the UK offer throughout the seasons. While their meat and fish come from small farms and fishermen around the country, they also embrace Brixton’s connection with its markets and food culture to create dishes that are about linking the countryside and the famously urban environment of South London to create something special.

There is little interference with these quality ingredients to make exceptional food. A puree of fresh turnips for example will simply be about the freshest vegetables cooked and seasoned beautifully. This style of cooking allows the skills and heritage of the growers and producers to speak quietly but effectively for itself rather allow trends or fashions to overwhelm them. It’s cooking for people who love food rather than flamboyance. 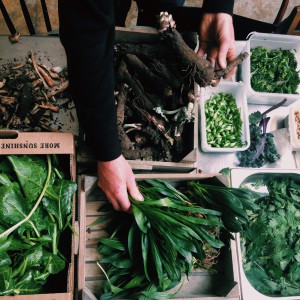 This pared down approach doesn’t mean it isn’t interesting. The devil is in the detail from the research on the ingredients from the importance of regionality or breed to meat or the way that the bar infuses its own spirits and bitters or the way the kitchen uses the ‘nose to tail’ philosophy to cut down on wastage and encourage people to eat more seasonally and a more diverse range of fruit, veg, meat and fish. Many of the staff trained at St John where this philosophy started and are moving it on to keep it fresh and ever evolving.

Beehive Place however are aware that this emphasis on quality costs money and that can lead to some people feeling excluded or that they have parachuted into the area, but they have strong connections to the area and believe it’s a place where people prefer substance and skill to their food over simply style, but that opinions vary.

Feedback from those who have eaten there have been broadly positive with not a single plate of food returned since November, but plenty of customers returning to eat their way through the seasons and experience the environment at different times of the year. After the weekly run finishes at the end of June, Beehive Place will be doing monthly events that keep both the cooking and the venue going and maturing. Sam and his team look forward to welcoming you and talking about the food and Brixton.

Tickets can be booked here. You can also see the dishes and ingredients as they happen on Instagram @beehive_place