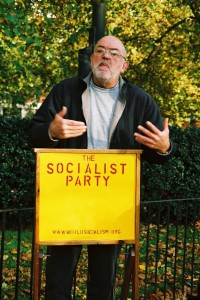 Councillor Lib Peck, Labour Leader of  the ‘co-operative’ Lambeth Council
wrote recently in the free Lambeth Talk magazine with no sense of irony;
‘I look back on 2013 with a sense of pride in our achievements.’

2013 saw Lambeth Labour Council use heavies or bailiffs in jumpsuits and
helmets to kick out so-called squatters out of properties in Rushcroft
Road, Brixton who had been living there for 32 years.
From April 2013 the Government reduced housing benefit for working age
tenants in social housing who have spare bedrooms (the Bedroom Tax). The
Loughborough Estate Tenants and Residents Association urged Lambeth
Council not to make those tenants leave their homes who face eviction as a
result of the Bedroom Tax. Residents are ‘terrified’ by the rent arrears
they have built up since the introduction of the Bedroom Tax. Lambeth
Council is refusing to rule out the eviction of tenants who fail to keep
up with their rent.

Then there are the short-life housing co-operatives in Lambeth which were
uninhabitable 30 years ago and Lambeth residents took them on and made
them family homes only now to be told they are to be evicted. The
co-operative Labour Council in Lambeth want to sell these properties to
property developers. Family homes lovingly taken care of by people will be
repossessed by the Council and sold to the likes of  millionaire
ex-cabinet minister and  former jail bird  Chris Huhne who was seen
viewing two short-life properties in Lilleshall Road in Clapham that are
being sold off at auction by Lambeth Council.

Housing has everything to do with the market. Houses like everything else
under capitalism are produced to be sold with a view to profit. They are
not produced simply for people to live in. The provision of somewhere to
live is determined by money considerations and market forces. Capitalism
will never be able to provide secure and decent housing for all. If you
can’t afford the rent or mortgage then you don’t count  in capitalism.

The housing problem would not exist in a socialist society that aimed at
meeting human needs rather than making profits for the few. With the
ending of ownership, the meaning of ‘tenancy’ will mean something
different than it does in capitalism. It will mean the democratically
agreed right to occupy a home for as long as you want.

The Socialist Party advocates the abolition of Capitalism which is a
system of society based on the class monopoly of the means of life, it has
the following six essential characteristics:
1. Generalised commodity production, nearly all wealth being produced for
sale on a market.
2. The investment of capital in production with a view to obtaining a
monetary profit.
3. The exploitation of wage labour, the source of profit being the unpaid
labour of the producers.
4. The regulation of production by the market via a competitive struggle
for profits.
5. The accumulation of capital out of profits, leading to the expansion
and development of the forces of production.
6. A single world economy.

3. Education
Education of the young is the first way in which they are given a
foretaste of what life will be like when they reach adulthood. Most
children are given a deceptively benign introduction to capitalist
schooling. At first no pressure is put on them to do other than play and
have their natural inquisitiveness and sense of adventure stimulated and
satisfied. But this soon gives way to the real business of education.
Schooling takes the place of kindergarten. Some children don’t even have
the benefit of kindergarten—they are thrown straight into school. Starting
with first year children, a concept called ‘career education’ has been
used to permeate all academic subjects at all levels of education: The
whole curriculum, from start to finish, is conducted within an atmosphere
of competition and stress, together with a weeding-out process which
segregates those with supposedly superior talents from those less
fortunate. This is accomplished through the use of tests, examinations and
grading, all of which have a direct bearing upon ultimate occupations and
potential earnings. Such an environment prevents the pleasurable pursuit
of education as a primary end in itself. The young find themselves
involved in an intensive training programme, presented under the guise of
education, which will ultimately affect the price of their labour-power
and in many instances can prove disastrous healthwise.
Thus schools—or at least the general run of state schools and even many of
the fee-paying schools—produce minimally skilled workers for wage or
salary labour. These institutions ‘educate’ workers to an ideology of
compliance. Schools play an essential role in maintaining the status quo.
‘A capitalist society requires certain general human traits and
institutional features, and schools function to fulfil these demands’.
Education for life has long been a goal set up and discussed by teachers
and others. Capitalism is increasingly eroding that role, transforming it
into education for employment (or unemployment). The idea is ‘that school
should equip children from all social backgrounds with a greater
understanding and experience of the world of work, and in the process
equip them with social and technical skills required by employers’  The
raw material of education—the acquisition and evaluation of
knowledge—is strongly influenced by its capitalist environment. ‘Really
useful knowledge has come to mean skills which help you get on and make
it, not insights that help you combine with others to build a better
world’. The privatisation of the public realm, the permeation of market
values into the most intimate reaches of personal and social life, is
apparent at all levels of education.
Privatisation is particularly evident in academia itself. Academics are
increasingly obliged to act (and some no doubt willingly act) as agents of
capital within the public sector. They look for commercial funding for
projects that are tied to national policy institutions and are partnered
by prestigious firms, usually national or multinational in scope. Their
own advancement is no longer dependent primarily on publications. Instead
it depends at least partly on success in marketing activity. The scope of
subject relevance is limited tacitly to exclude challenge of the status
quo.

4. Leisure
In a 1966 article the idea was posited that in the future capitalism would
develop into ‘The Leisure Society’ because of the rise of automation. This
had not come to pass, as it never would under capitalism. Automation,
productivity has increased and so have the profits of the capitalist
class, but real wages for workers have not increased in decades.
It is leisure and idleness the worker needs (leisure to enjoy and idleness
to recuperate), the worker does not pursue work because he/she loves the
burden of toil; he/she does so because, as a rule, unless he/she works
he/she cannot obtain the wherewithal to live. It is not their, but a
misfortune – we are born into wage slavery.
The promise of ease and comfort, leisure and luxury, to the many can only
be fulfilled when the many own the product of their energy, and that would
be in a socialist society.

5. Environment
The techniques employed to transform materials must, if they are to avoid
upsetting natural cycles which are fundamental to nature, avoid releasing
into the biosphere or leaving as waste products, toxic substances or
substances that cannot be assimilated by nature. In other words, a
non-polluting technology should be applied. This is quite feasible from a
technical point of view since non-polluting transformation techniques are
known in all fields of production. However, they are not employed on any
wide scale today because they would add to production costs and so are
ruled out by the economic laws of capitalism.
If human society is to be able to organize its production in an
ecologically acceptable way, then it must abolish the capitalist economic
mechanism of capital accumulation and gear production instead to the
direct satisfaction of needs.