An occupation has begun on the Loughborough Park Estate as tenants continue to fight against evictions.

For the second time this year Flat 82, Evleden House, is the centre of a protest against its landlords, The Guinness Partnership Housing Association.

A group of “tenants, residents, guardians and squatters” is occupying the residence, and a banner has been hung from the balcony which says: “No eviction! No more demolition!”

Demonstrators want those forced to leave their homes as part of Guinness’ controversial regeneration of the estate to be re-housed at affordable rents with secure tenancies.

Campaigners say a similar protest earlier this year succeeded in pressurising Guinness to make offers to re-house tenants in other properties they own.

Guinness says that its £100 million regeneration project will see the 390 existing flats replaced with 487 new, spacious and energy-efficient homes. 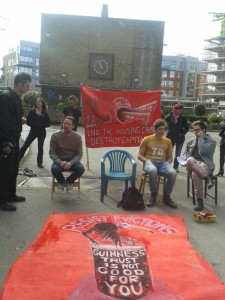 Residents on lifetime tenancies will be re-housed in the new flats, however those on assured shorthold tenancies (ASTs) are being evicted and forced to move out of the area.

Beitel Mehari, 42, a single mother of two children, who lived on the estate for 10 years, was re-housed on Friday at another of Guinness’ estates at Kennington Park Road.
Her rent has increased from £120 per week to £265 per week, which she says is “unaffordable”.

Mehari said: “I am really devastated because I love Brixton. They have destroyed the community over the years. When I was leaving I was in tears. You feel really used. We were there when nobody wanted to live in Brixton, and now when it is all nice and clean and green, we get moved on.”

Guinness say they have taken steps to help those who are being forced to leave their flats, including payments of £4,700 to each AST resident for the inconvenience and £1,500 towards the deposit for a property rented in the private sector.

A spokesperson for the Guinness Partnership said: “We’ve been clear from the outset they would not be entitled to be re-housed when the site was redeveloped. They agreed to this when they moved in and we’ve given them more than a year’s notice.

“The vast majority of the squatters who have broken into a vacant flat do not live at Loughborough Park, and we are working with the police to ensure they are removed as quickly and safely as possible.”