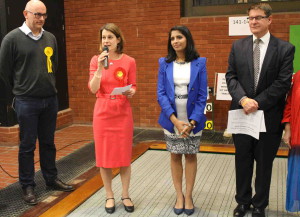 Helen Hayes has retained the Dulwich and West Norwood seat for Labour (previously held by Labour’s Tessa Jowell) – with 54.1% of the votes, over her Conservative rival Resham Kotecha’s 22.7%.

The biggest loss in the constituency was to the Liberal Democrats, whose share of the votes went down by 17.3%.

Speaking after the announcement, Hayes said: “It is a huge huge privilege to be elected as member of parliament for Dulwich and West Norwood.

“I will work from day one to get Network Rail to take a different approach to the arches and I will work on behalf of every part of our community to deal with the complex challenges that we face in Brixton. ”

Election night in Brixton: the results from Vauxhall, Streatham and Dulwich...