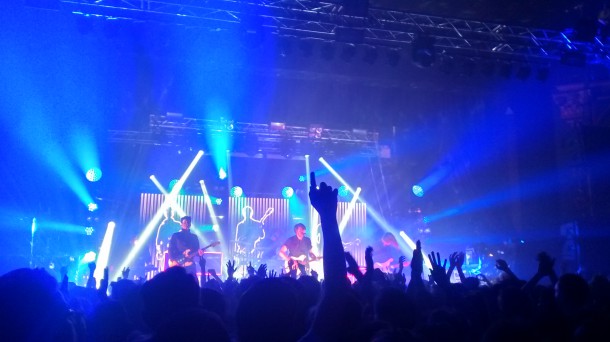 There’s definitely something special in the air tonight, and it’s not just sixth formers overdoing it with the Lynx Apollo. It might be time for Brixton to claim The Vaccines as one of its own. Having played their first London gig at the Windmill in July 2010, they popped back to play the 150 person venue just months after headlining the arguably slightly more high-profile O2 Arena. Sure, they were formed in West London, but who wants to admit to being from West London? The Vaccines are on to a winner with this quick shift over the other side of the river, especially as the next South London landmark they’ve wisely chosen to earmark for Exciting Intimate Gig status is the Electric Brixton.

They certainly adopt a philosophy tonight of – to use the technical term – ‘not messing about’. They dispense nineteen tracks over the course of an hour, hitting the ground at a storming pace.

New tracks focus on rhythm: ‘Dream Lover’ has an expansive swagger to it, and is far more encouraging than the Vaccines-by-numbers fare of comeback single ‘Handsome’. The hook from ‘Want You So Bad’ meanwhile could get The Cure’s lawyers very excited in the current litigious climate.

‘Handsome’ is introduced with a dry announcement of “here’s a song about how handsome I am”. Most of the crowd seem happy to agree, and it’s fair enough: few would deny that The Vaccines broadly maintain an attractive aesthetic. Lead singer Justin Young is a firm favourite, despite how common it is for fans to not be able to recall his name.

They unquestionably play the hits tight. Nobody could deny the band know their way around an indie-chart smash. It’s not certain from tonight if they’d have the imagination and rock star strut to send 20,000 people in an arena home thinking ‘yep that’s £30 well spent’, but in Electric Brixton’s surroundings everybody is jumping about, drinks are going flying, guys are getting on their mates shoulders, girls are singing along at the top of their voices to ‘Post Break Up Sex’, and the Vaccines are every inch the perfect band for the occasion.