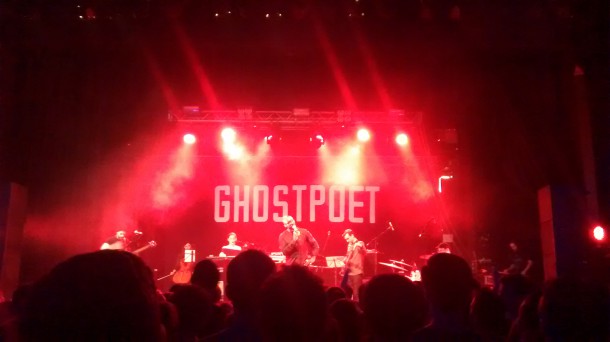 Ghostpoet (aka Obaro Ejimiwe) has something of a miserablist reputation. His move into alt-rock territory on new album ‘Shedding Skin’ will sound familiar to The National’s hoards of fans, but tonight at Electric Brixton there’s no time for miserablism. Oh sure, the songs will cover fairly downbeat topics such as homelessness and the futile pursuit of some semblance of romantic happiness, but just because you’re as fully formed an artist as Ghostpoet, it doesn’t mean you have to give in to temptation to act like your music on stage. Tonight should be a cause for celebration.

More on that in a second, but even before doors open tonight there’s whispers of the sense of occasion being threatened early by a certain Ryan Gosling putting in a special appearance on the other side of Brixton Oval. For Ghostpoet, tonight is both the final night of the tour and the homecoming gig. London shows often come as the final night of tours, presumably because it’s such an important show for any touring band. The upshot of this is that London fans often have to wait an age until their favourite bands come to town – whilst still typically paying more for the experience – but at least it means that bands are usually on pretty damn good form by the time they arrive. Ejimiwe meanwhile is also vocally celebrating being able to get the bus home to Tooting after the gig.

As could reasonably be predicted then, the fresh live band lineup that arrived alongside this album now appears settled and well honed. Live, sonic blasts hit you harder than on record, which for the most part stops proceedings getting overly repetitive – although it’s difficult to imagine any newcomers to Ghostpoet not experiencing their mind wandering at certain points throughout the evening.

For the committed fans however, there’s little to complain about. Ejimiwe himself is a popular figurehead, a fact made clear enough when one female exclaims “oh I want to shave his beard so badly” in a manner so filled with insistent lust, you wonder if he’ll make it back unscathed to Tooting after all.

By this point in the evening the musical template has been set: spiralling alt-rock epics gradually invite the audience to lose themselves within. Tracks often build to a powerful racket. A three-piece string section gets deployed with pleasing restraint. Not everybody sticks around for an encore. Their loss: things end on a surprisingly euphoric note. Nothing can stand in the way of a celebration tonight.

Mark Muldoon still can’t quite come to terms with what he saw on a bus to Tooting last night, but he will be attempting to describe it here http://twitter.com/muldoon and on Instagram here https://instagram.com/muldooon.