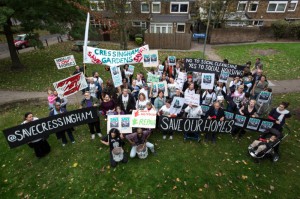 Residents on the Cressingham Gardens estate have launched a “fighting fund” to stop the demolition of their homes. They are looking to raise £10,000 through a Gofundme campaign. The residents are fighting against proposals by Lambeth council to regenerate the estate.They would prefer to see its full refurbishment – a proposal that was ruled out at Monday’s cabinet meeting – as residents say they don’t want to see their community ripped apart.The money raised will go towards legal fees to challenge the councils proposals and towards materials for banners and leaflets.The Gofundme page says: “The tightly knit community, which has been there since the 1970s, has been treated very shabbily by Lambeth Council.  A lengthy & exhausting ‘consultation’ exercise turned out to be a sham, with the council now insisting that demolition is the only way forward.“Many of the estate’s residents are old and infirm. Many have lived there for 40 years. They don’t want to see their community torn apart and replaced by luxury flats.”

Cllr Lib Peck, leader of the council, says she believes Lambeth is doing the right thing for Cressingham.

She said the regeneration plans “will strengthen, not destroy” the estate’s community and add more social housing to the borough.

You can donate to the fundraiser here and sign the Save Cressingham petition here.

Business as usual at farmers market after council ‘clarifies’ position