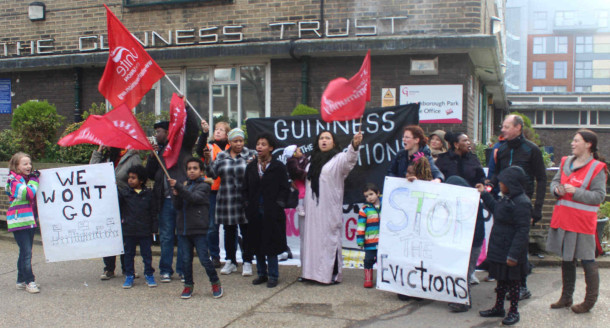 Demonstrators gathered outside the Guinness Trust office on the Loughborough Park estate this morning to protest against the ongoing evictions.

The protesters have also begun an occupation of a flat on the estate.

At the demonstration, residents, supporters and children waved signs, chanting “we won’t go” and “how can a charity do this?”

The housing association Guinness Trust, which has charitable status, is evicting tenants to make way for new flats to be sold at the market rate.

The protesters, most of whom have lived on the estate for over ten years and have children at schools in the area, say they are being “socially cleansed” as they won’t be able to afford the cost of private renting in the area.

Arinola Adefuwa said she is being evicted on Thursday and “doesn’t know what will happen next. The stress has made me sick. I’m exhausted.”

On Saturday evening, activists began an occupation of a flat in Elveden House on the estate.

When they arrived they found Guinness Trust had trashed most of the property and cut the water supply.

Betiel Mehari said: “The reason we have occupied an empty flat is because we needed a base, a place where we can meet up and unite. Now we can have meetings here and residents and supporters can drop in.”

“There are so many empty flats in this building and the one next to it, while people are left homeless. Its ridiculous.”

Mehari said after a long time of being ignored by Guinness, she and the other tenants facing eviction have been told individual meetings will be held.

“We want to be talked to as a group,” she said, “but I can see that they want to divide and conquer.”

Despite this, Mehari says she is feeling positive and “overwhelmed by the support we are getting.”

“People who used to be afraid of speaking out have joined us. For me its a victory that we are able to come together to tell Guinness: ‘we won’t stand for this.'”