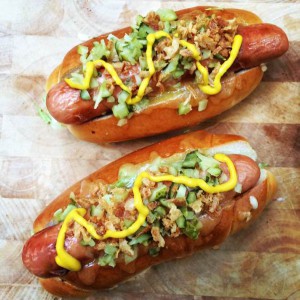 Born a foodie. Raised a veggie. Led astray as a teen by the sweet smell of frying bacon. Joined adulthood a fully-fledged meat enthusiast. I could easily be describing me, but in fact I’m giving you some background on hot dog flogger and sausage aficionado Joel Bowen, the brains behind mobile vendor Oh My Dog!

Joel’s stated mission is to reverse the British notion of hot dogs as a cheap, no-frills fast food churned out around football grounds from grubby-looking vendor vans. Nothing wrong with that of course – it fills a hole, but just as the burger has re-branded in recent years to find a new audience, so too, Joel believes, there is room for the hot dog to grow.

To prove this, Joel cites America, where hot dogs are a way of life. I’m told Americans consume over 20 billion a year. I don’t know if that’s combined or each, but either way it’s big business, and this Joel chalks up to two things: quality franks and inventive toppings. A lot of trying and tweaking later and the team are confident they have a winning formula.

After perusing the menu, my girlfriend and I ordered the classic-looking Yumdog, the Chilli-Steakdog and three sides: the Slaw, the Bourbon Baked Beans and plain fries.

The fries were actually a fall back option. We’d been eyeing up the crispy fried mac and cheese, but when I went to order I noticed they were out. I made a snap decision, which sadly turned out to be the one poor one we made.

I wouldn’t say they were bad, but a crisper bite and something delicious to dip them in would have made a big difference. In hindsight, I should have picked the signature fries, which comes topped with cheese, onion and jalapeños. 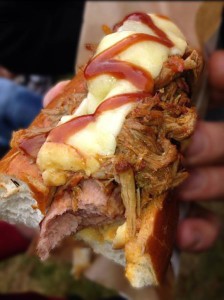 The rich, smoky beans were attacked with gusto however, as was the crisp, lemony, perfectly mayo-ed slaw – although neither are why you’d make the trip. When it comes down to it, it’s all about the hot dogs. So what of them? Well, for my money, they live up to the billing.

The stars of the show – authentic, Frankfurt-sourced – are meaty and flavourful. I found it satisfying the way the skin puts up a little resistance before bursting into a deliciously smoky tang. I can see the argument that brioche is perhaps overused at times, but here the soft, semi-sweet buns provide the perfect counterbalance to the smoky, salty meat. The ratio of bun to sausage is well judged too.

As for the toppings, I feel they complement and enhance superbly. There’s nothing especially ground-breaking about the Yumdog’s gherkin, mature cheddar, onion and mustard combo – it’s just very well executed, and pretty much the essence of hot dog.

The Chilli-Steakdog (pulled bourbon chilli-steak, onions, mature cheddar, sour cream and jalapeños) is bolder and showier, but again, the real skill is in the balance of flavours. I was particularly impressed by the way the beautifully soft beef held its own, including against the smokiness of the sausage.

So am I a convert? I would say so, yes, but it’s never been very hard to convince me to eat tasty food – usually it’s a question of how I stop myself. Convincing the rest of country will be more of a challenge, but I sense Joel’s up for it.

There is more cheese love at Cheeseweasel’s blog.