An established London comedy night had its Brixton debut on Tuesday 17th February.

Laugh out London Comedy hosts regular nights in Camden, Islington, Victoria Park and Stoke Newington. Run by Jack De’Ath and Thomas Meek, it celebrated its bold venture south of the river with a strong line up.

The inventive and cheeky MC Tom Webb, a regular MC at the 99 Club in Covent Garden, hosted the evening, warming the crowd up and introducing himself as “T-Wee”. By the end of the night Tom may have successfully set up two audience members – watch this space.

The first act, Nish Kumar, was slick and witty, touching on the black James Bond debate with some great comebacks to the “but James Bond is WHITE” argument. Best moment from him was a debate on the terminology of climate change. “Oxygen recession” does indeed sound more imminently life threatening. 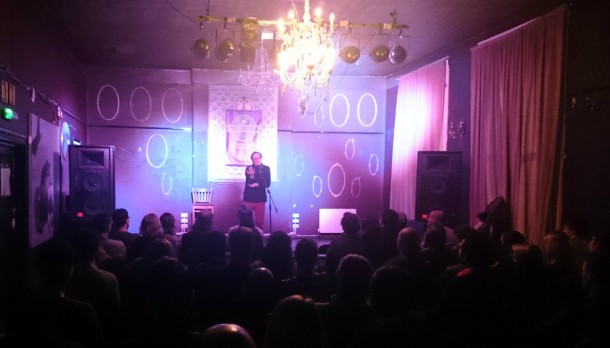 The fast-paced and animated Phil Nichol was up next. Loud and Canadian, he was at times almost too fast-paced to keep up with. Off stage he admitted he was trying out new material, most of which worked. A completely different style to Nish’s slicker set, Phil’s anecdotes about relationships ending were delivered with an energy that was a notch above most comedians. Best jokes from him included an excellent reply to ye olde “talk to the hand” put down, which I sincerely hope to be able to use – although it only works if they have fat hands. I also suspect most of the audience now can’t look at Fernando Torres in the same way.

After the interval was Gabby Best, aka her alter ego Marijana, health and happiness guru to the stars. She easily drew the most consistent level of laughter with quips including “may the wind be always up your backside – a healthy bowel equals a healthy heart”, and the delightfully deep “a cow is still a cow, even if it is not mooing.”

Final act Simon Munnery was probably the most hyped performer, and impressed with an excellent Winston Churchill impression. My idea of how Churchill sounds derives mostly from The King’s Speech, but he sounded authentic to me. A veteran performer (since the early 1990s), he delivered an energetic performance occasionally aided by a harmonica. One joke that fell slightly flat aside, his casual manner and parenting anecdotes had us in stitches.

De’Ath said of the night:

It’s great to finally bring the night to south London, and where better to start than in Brixton. We’ve always been lucky to have so many comics we love perform at our nights; Stewart Lee has always been one of our favourites alongside Tony Law and Josie Long.

My ones to watch this year are Nish Kumar, Harriet Kemsley and Joz Norris. Nish just keeps getting better, and it’s about time that he gets the recognition he deserves. Harriet has been supporting Katherine Ryan on tour and is preparing her debut show this year, and Joz has developed so much in the past 12 months into a playful but soulful comic. He does a great Prince impression too.

Laugh out London will be at the Dogstar on the third Tuesday of every month, with the next one being on the 17th March. Tickets are on sale now to see Tony Law, Alex Edelman, Bobby Mair, Twisted Loaf and Tom Webb as the MC.

More information is available on the Laugh Out London Comedy website.

Tip of the day: Meet Brixton