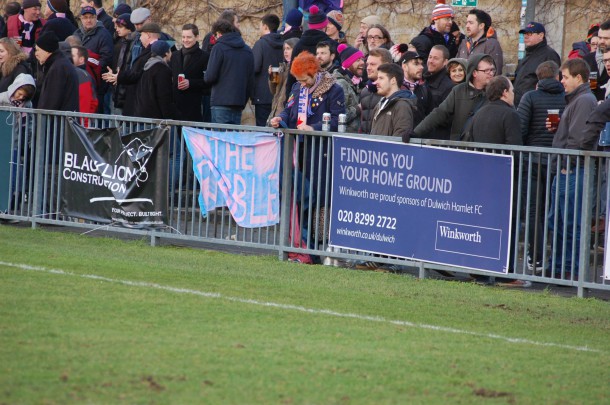 High-flying Dulwich Hamlet have announced the signings of two new players purchased via the club’s fan-funded drive. Former Bognor Regis player Mu Maan has joined the South London side along with former MK Dons striker Serge Makofo. The signings of both attackers were financed by the Pink and Blues’ 12th Man scheme, which raises cash to be used exclusively on buying new players.

More than £20,000 has been raised through the scheme since its launch in 2012. The funds, which have been used to bring in 15 players to date, have covered the cost of Hamlet’s in-form left-back Frazer Shaw.

“Serge has played at a higher level than Conference South and played in the league. He has come in and shown he has a good understanding of the game”, said Dulwich boss Gavin Rose in a post-match interview with Football Exclusives.

“He has been frustrated by not playing a lot of games. He has been on the bench at Whitehawk who are a good competitive team in the league above us. Hopefully he will be a good addition for us this month”.

The signings of Makofo and Maan capped off a successful weekend for the Ryman Premier title chasers who defeated Grays Athletic on Saturday. Goals from Albert Jarrett and Xavier Vidal resulted in a two-nil victory for Dulwich, who are currently four points behind league leaders Maidstone. Canvey Island will be up next for Gavin Rose’s team. They will face the Essex side at Champion Hill this Saturday.