On Saturday 22 November and Sunday 23 the Ovalhouse are proud to host a new festival, Talking/Making/Taking Part, presented by locally-based creative duo, Dialogue. 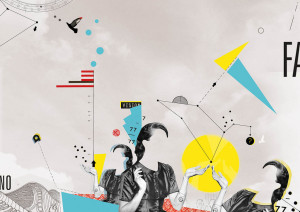 Talking/Making/Taking Part promises lively discussions and interactive performances, priding itself on accessibility and good value for money  – a ticket costs £7  for one day, and £10 for the whole weekend, with lunch  provided in the cafe free on both days.

Dialogue was formed in 2012 and is a collaboration between theatre and pop critic Maddy Costa, and Jake Orr, founder of A Younger Theatre and was born out of a shared frustration with how difficult the arts can be to break into and to access. This will be their first festival and an achievement they are proud of. Maddy Costa described the festival as “an attempt at making the kind of theatre we’d like to live in. And through that, making the kind of world we want to live in – even for just a weekend”.

The festival aims to examine one core question – how can theatre help us to better understand each other? From discussions directly addressing the roles art can play in political engagement, to interactive performances for both solo audience members and bigger groups, the festival hopes to introduce new voices to this debate and reach out to people who aren’t already regular theatre-goers.

Different on each day, the programme begins with Opening Discussions, led by Andy Horwitz (Culturebot, USA). These are Long Table discussions which invite everyone to contribute equally to the debate, and feature key speakers including Hassan Mahamdallie and Julia Taudevin. There will also be Afternnon Ideas led by Tanuja Amarasuriya (Theatre Bristol) on Saturday 22, and Mary Paterson (Something Other) on Sunday 23.

Click here to find out more and book your place.