The developer of a 152-home and 3,800 sq m office development in the heart of Loughborough Junction has responded to criticism over its consultation process with residents.

Residents wrote to the Blog saying that developers had “done a great job” of hiding the plans from residents, and called the whole consultation process a “sham“.

Lambeth council is set to decide on the plans for the Higgs Industrial Estate, at the junction of Herne Hill Road and Coldharbour Lane. Plans include four apartment blocks up to eight storeys, and a ten storey office block. 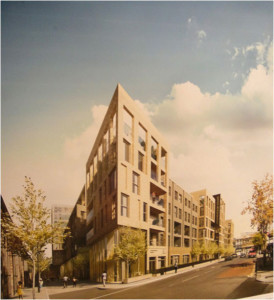 He added: “As such, we think that accusations of us “hiding” information and the branding of the public consultation process as being a “sham” are very inaccurate. We did get reports from some residents that notices on site had been taken down which we also discussed with our case officer, these were replaced but unfortunately there is no way of completely safeguarding against problems like this.”

Boyle confirmed that part of the development would be provided as “affordable” housing “in line with Lambeth council policy”, as well as a public park.

“A very large Section 106 payment will be made to the council (subject to planning approval) that is used to prepare the local infrastructure for the inclusion of the proposed scheme; there will be various sums associated with health, education, highways etc that the council will allocate accordingly.

“We believe that our proposed scheme will greatly benefit the immediate area whist also assisting in London’s housing shortage.”

Yesterday it emerged there was a divide between many residents, and within Loughborough Junction Action Group, over the issue of massing, or density, of the development.

The target determination date set by Lambeth council is December 5.

How you can have your say:

Residents in HGV plea to council