Residents have accused developers of hiding details for a mega development scheme in the centre of Loughborough Junction that includes five office and apartment blocks up to ten storeys high.

An extra meeting for residents to discuss the plans has been organised by Loughborough Junction Action Group (LJAG) tonight (Tuesday) from 7-9pm at Sunshine International Arts Cafe, in Coldharbour Lane.

The plans have been put forward by planned by Parritt Leng for the Higgs Industrial Estate at bottom of Herne Hill Rd near junction with Coldharbour Lane.

One local resident who did not want to be named, called the planned architecture “so unimaginative it makes Brixton Square look like a contender for the Stirling Prize.” 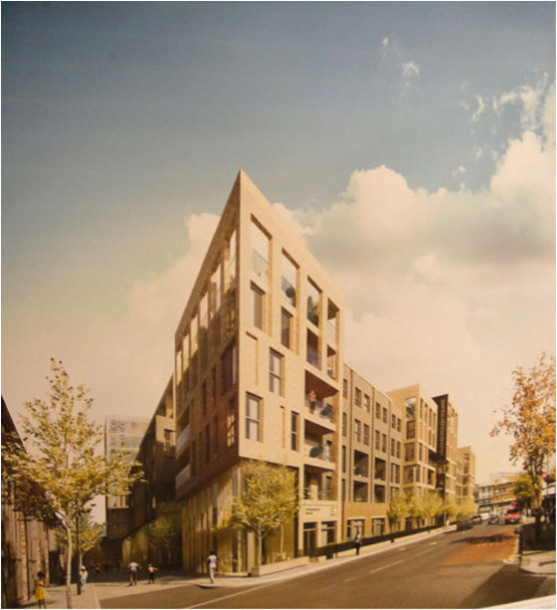 In a letter to Brixton Blog they added: “Developers confident they’ll get plans through and they’ve done a great job of hiding them from the community so far. Local councillors agree consultation’s been a sham and most residents have no idea this is happening!

“Somebody went round and cut all the planning notices down and the developers only leafleted streets within about 120m radius of site but everyone using [the] station and other services will be affected!”

Anthea Masey, from LJAG, urged as many people as possible to come to tonight’s meeting, She said: “This is the most important planning application that Loughborough Junction has seen since the Loughborough Estate was built in the late 1950s. Copies of the plans will be available to inspect.”

Speaking in a purely personal capacity, she told Brixton Blog: “I think that as long as it is mixed use, a high density development is not a bad thing, but it will cause a divide between residents.

She added: “It is the issue of massing that divides opinion.”

How you can have your say:

LJAG is holding a further consultation meeting about the planning applications put in by Parritt Leng for the Higgs Triangle TONIGHT from 7-9pm at Sunshine International Arts CAFE, 209a Coldharbour

EDIT: This article was edited at 11.45am to remove the names of two residents who signed an email to Brixton Blog that is quoted above, at their request.

A Station Square for LJ?