Mark Stangroom runs the VCR night at the Electric Social, supporting some of south London’s best underground electronic music. Here he profiles out some of the finest south London DJs and producers who have shared their cutting edge sounds at VCR in 2014 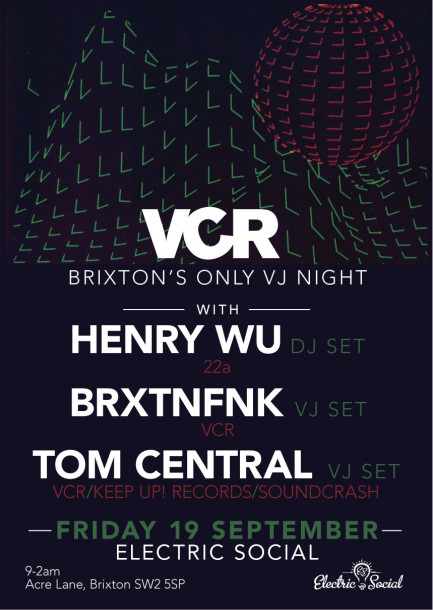 VCR has been putting on some of Brixton’s best parties for nearly 18 months now, as well as supporting some of the finest underground electronic music talent this side of the river.

Ben Hauke (Melodica) blew the dance floor to pieces with a one man show, performing all his own material on an SP 404 on his visit. Ben has such a cult following that people even turned up to see his set en route from France to Poland via Heathrow airport!

Hector Plimmer (Monsta Playground/92 Points) has been burning up dance floors around London for some time now and has built up a reputation as a selector with deep crates and a sophisticated taste in old and new vibes. Check him out on NTS Radio and here on soundcloud.

DJ Gilla (First Word Records) is the head honcho of one of South Londons finest record labels. DJ, A&R and all round gentleman, Gilla even brought us presents when he came to play! First Word were the label for one of the records of the year in 2013 in the shape of Andrew Ashong’s ‘Flowers’ so be sure to keep an eye on what they have coming up this Autumn.

Brixton local B£AMS (No Pain In Pop) has an sophisticated ear and a sonic palette to match. His off kilter beats and avant garde soundscapes have been released on two labels already, with another EP in the pipeline. Stay tuned.

This month see’s the turn of Peckham’s Henry Wu to join residents Tom Central and BRXTNFNK. For the uninitiated Henry’s been recently hailed as one of the London’s brightest new talents alongside other South London producers such as Mo Kolours and Al Dobson Jr. His music is influenced by hip hop, synth boogie, deep house and afro sounds. The result is earthy and soulful modern beats. Following releases on 22a, he’s also about to release a 12″ on Ho Tep, Alex Nut’s sister label to Eglo. High praise indeed!

Tom Central himself is one of the key figures behind Keep Up! Records, who have been representing South London for many years. The label have been fairly quiet since last years fantastic Keita Sano EP but are about to unleash some leftfield jazz and beats with remixes from some of the scenes most innovative producers, whilst BRXTNFNK has been working on his own musical projects, and sound testing them on the VCR crowds over the last few months.

5 February, 2015
We use cookies to ensure that we give you the best experience on our website. If you continue to use this site we will assume that you are happy with it.OKPrivacy policy