I’ve lived a stone’s throw from Brixton Prison for much of my life and yet it has remained a curiosity – out of sight and mind. So I jumped at the chance to venture behind its austere walls to find out a little more about the Bad Boys’ Bakery, an innovative social enterprise based at the prison.

The Bakery was the brainchild of a certain Gordon Ramsay, who first set it up back in 2012. The aim was to give people with convictions the chance to gain work experience and generally do something positive with their time in prison.

The launch of the scheme, which formed the basis of TV series Gordon Behind Bars, coincided with Brixton’s re-categorisation in the same year as a category ‘C’ prison.This was a major reinvention designed to transform Brixton into London’s first prison specialised in preparing inmates for reintegration into society.

Brixton Prison has endured a turbulent post-war history, during which time sustained neglect established it as one of the UK’s most notorious prisons, rife with suicide, overcrowding and attempted escapes.

Brixton was condemned at the turn of the Millennium by the Chief Inspector of Prisons as having the most “disgraceful example of conditions in a prison” he had seen, whereupon things slowly began to turn around.

The Bad Boys’ Bakery – which has since been taken over by the welfare-to-work provider Working Links – is one of the standard-bearers of this upturn in fortunes. It boasts an impressive record at reducing both re-offending and unemployment rates on release. Compared to the national average of 47% of people who re-offend within a year of leaving prison, the figure for Bakery alumni stands at just 6%. For people entering into a difficult period in their lives, it represents a vital opportunity to gain back self-respect and confidence.

On arrival at the Prison, I’m shown into the central yard and kitchen by Aoibheann Calelly, the young Irish woman who runs the bakery on behalf of Working Links. Apart from the large quantities of barbed wire on show, from the inside it doesn’t look or feel obviously like a prison. The bakery itself is a hive of activity as we enter, the aroma of freshly baked bread overwhelming any apprehension I might have felt about being ‘inside’.

I am introduced to Kyle and Frank, who are cooking up some Marble Brownies bound for Brixton Market. Frank is midway through his first morning on the job, so probably the last thing he wants is to be asked lots of questions. Nevertheless, they are both forthcoming and Kyle – a supervisor – gives a particularly impassioned account of what working at the Bakery has done for him.

Kyle says the Bakery has given him a focus and made the days go quicker, and is also proud of the responsibility and creativity that he’s been afforded there.

He is particularly proud of an Orange Brownie recipe he recently came up with which has apparently taken the place by storm. Touchingly, he says that as well as setting up his own bakery market stall on the outside when he’s released, he is most looking forward to teaching his children to make brownies. He’s due for release in five weeks, but isn’t taking anything for granted.

The initial association with Gordon Ramsay has been a godsend, Aoibheann says, opening doors and setting the Bakery on the path to a sustainable future. The Bakery supplies a number of local delis, stalls and cafes (over 200 in total), including Brixton Village’s Cornercopia and The Joint, selected Caffe Neros in South London and The Clink, a recently-opened fine dining restaurant also housed in the prison. The potty-mouthed maestro is no longer involved in the day-to-day, but he and his team make sure all the recipes are up to scratch.

All the inmates I talk to are clearly delighted to have something productive to do with their time, but the Boys also demonstrate a genuine passion for their craft and for baking. I’d be lying if I said there wasn’t something superficially incongruous about having the finer points of a pecan tart detailed by a burly man doing time for an unspecified crime, but it’s remarkable and touching how transformative a little responsibility and passion can be for people in a difficult situation.

One person who credits the Bakery for changing his entire mentality is Christian, an ex-Boy who now works full-time at The Joint in Brixton Village.

Christian moved to the UK from Colombia when he was 13 and was sentenced to five years inside for dealing drugs. When I meet him at The Joint later in the week, Christian tells me life inside was tough – ”prison life isn’t supposed to be easy” – although not threatening or violent necessarily, “just depressing.”

He explains that the atmosphere in Brixton Prison was often tense, despite the new emphasis on rehabilitation, a hangover from the previous high security regime. So the Bakery was a beacon of hope amidst a tough grind. Christian works 55 hours a week, a world away from his previous life as a dealer, but says he wouldn’t change a thing. ”

I’m not interested in that old side of my life. This is a small business growing quickly and I want to be part of that. I’ve got a little daughter and am getting married soon – things are great. And without the Bakery I probably wouldn’t be in this position. It changed my whole outlook.”

Find out more about the Bad Boys’ Bakery: www.badboysbakery.org 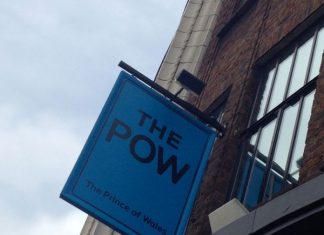 The Prince of Wales, Coldharbour Lane

Miss South - 11 November, 2013 4
There are new things afoot at the former The Prince on Coldharbour Lane. Shaking off the confusion of all the various guises it has...

Eating out the Vegan Way in Brixton

Review: Sunday Lunch Fails to Shine at the Effra Social

5 April, 2012
We use cookies to ensure that we give you the best experience on our website. If you continue to use this site we will assume that you are happy with it.OKPrivacy policy