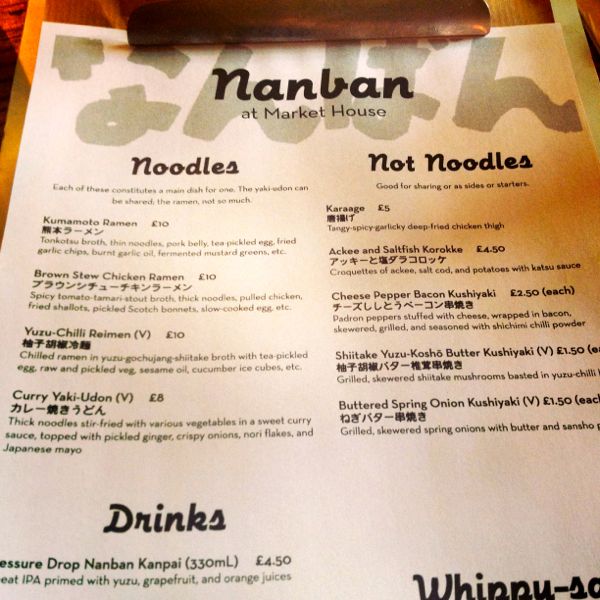 I am one of those people who can dabble with Masterchef. Some years I’m glued to itand others it doesn’t even register with me. But when I heard that Masterchef 2011 winner Tim Anderson was doing a month’s pop up as part of Market House’s new summer of food, my interest was piqued immediately. He won the show with a take on burgers, but with an interest of regional Japanese food and I guessed if anyone is going to make the current food trend of ramen exciting it would be him.

We arrived at 5.30 for dinner to guarantee we’d get a table, having read the menu online several times during the day counting down to this. The pub was surprisingly busy and keen to take our orders. Somehow I managed to miss the drinks part of the menu so didn’t try the limited edition Pressure Drop beer despite them being my favourite brewery outside our Brixton one.

The lotus root chips with hot mustard miso dip didn’t pass us by as a beer snack while we re-read the menu. Thinly sliced and deep fried, they were light, savoury and perfectly greaseless. One of my dining companions said they were as good as the crispy bits left behind when you roast something and we knew exactly what she meant. 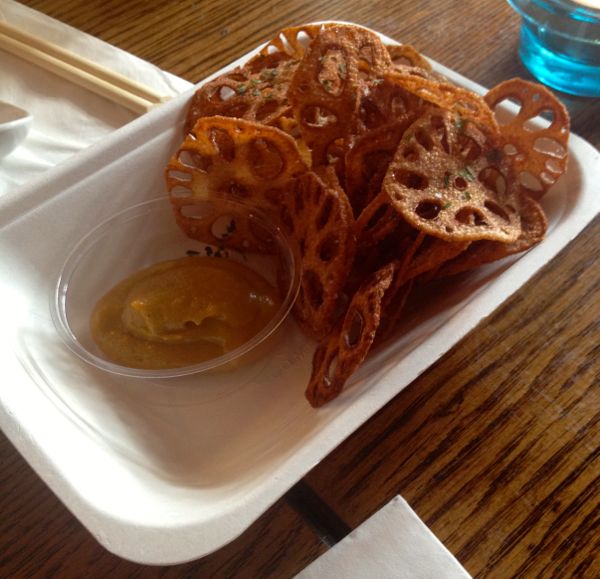 Seeing the standard of deep frying on offer, we had no hesitation in ordering the karaage or fried chicken and the saltfish and ackee korokke or croquettes to start. We also added a portion of the yuzu butter basted shiitake mushrooms. Everything arrived quickly and freshly cooked.

The shiitake were a generous portion of six slices. The yuzu gives a fresh citrussy flavour and there was a warmth of chilli and we liked the chewiness of the mushrooms. The saltfish and ackee korokke came looking like the fishcakes of my childhood with a light crisp outer and perfect soft saltfish inside. I like the flavour of ackee but struggle with the texture and this made it much more palatable to me. We didn’t leave a crumb behind.

The chicken came in an American style take out container and was marinated boneless chicken thigh pieces. We could just tell by looking the coating was light as a feather and again greaseless. Expecting good things, we bit in and fell silent momentarily. The meat was succulent and the flavour extraordinarily good with an intense savoury hit of soy and garlic. We wolfed it down and had to resist the urge to order more. Definitely the best karaage I’ve had and I always order it when I see it. 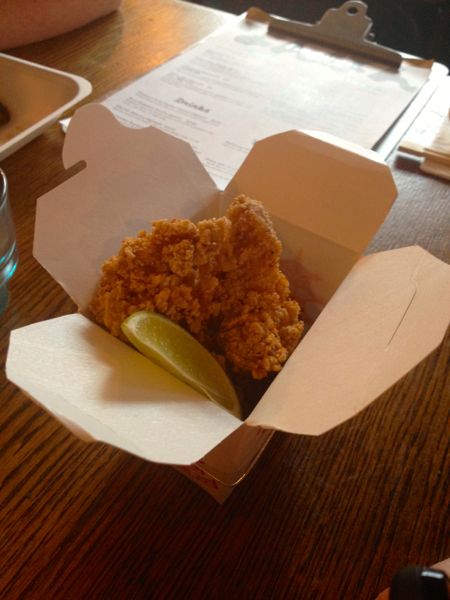 We’d ordered two portions of the brown stew chicken ramen and one of the curry yaki-udon for mains. The curry yaki-udon is a vegetarian dish, rich with sweet curry sauce and caramelised onions. Served in a small oval dish, it was delicious but a little tricky to eat needing more room to move since it was such a large portion.

The brown stew chicken ramen came in a large deep bowl and had plenty of room available. Fresh bouncy noodles, a perfect soft cooked egg and lots of chicken sat in  rich opaque brown broth. Used to light broths in my noodle soup, I immediately dug my spoon in to sample it, expecting layers of deep sticky savoury flavour like a good brown stew chicken gives. It just tasted brown and flat to me and I was intensely disappointed. 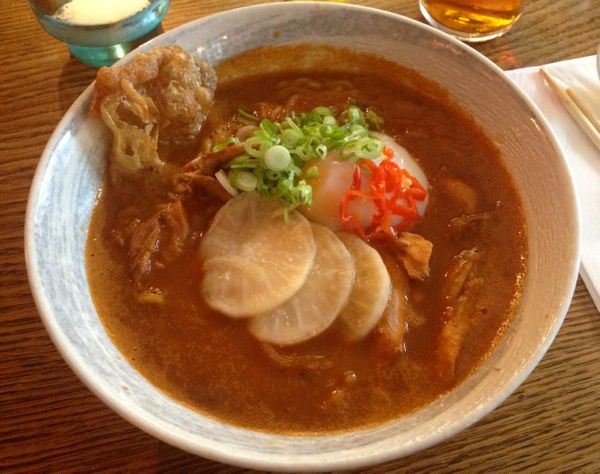 I saw that my friend was devouring his bowlful with gusto and wondered how we could feel so differently about the same dish. Then I realised he had broken his egg into the broth and stirred the pickled scotch bonnets through the soup rather than my rather British attempt to eat all it separately. I did the same and took a mouthful. All the layers came together and the dish became spectacular. Far from dominating, the scotch bonnets skilfully combined and enhanced it all. I can’t remember the last time a dish impressed me so much.

Nicely warmed by the heat of the scotch bonnets, we finished off with the melon matcha Mr Whippy ice cream. It was the texture we all knew from childhood but with  green tea and floral notes of a much more grown up dessert. We liked the slightly medicinal taste and loved the pale green colour. A good finish to the meal, as was the bill of around £40 for 3 excluding drinks for 3 courses.

The pub was packed when we were leaving and the atmosphere was great for a Monday night. Amounts are limited so I’d suggest getting down there early when you go. Nanban is in residence until the end of August and if you can book, do it. Previous pop ups at Market House this summer have been good, but this is another league up. A definite winner.

Mario Schifano wants to create the best cocktail bar around. And why not? Hundreds of Brixtonians would say that he already runs the best...