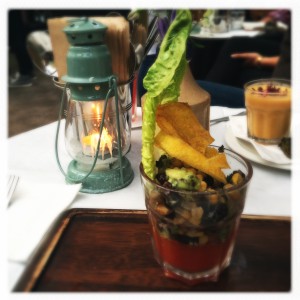 Confession: I am not a vegan. I am as far removed from veganism as one can be. I believe humans should use animals for food (sustainably and ethically, of course), and I believe that eating meat in moderation is healthy. I also believe that veganism is a wholly modern (and Western) phenomenon; cultures that have known famine are not known to be so choosy. I will avoid an ethical debate about the motivations behind veganism – we all know the many valid reasons – but suffice to say for me, eating is an actively omnivorous venture.

Brixtonites know Vozars as the newest incarnation of WAGfree in Brixton Village. And, when given the task of reviewing it for its gluten-free goodness, I had no idea that Asparagasm in all its euphemistic glory had taken over the space. Asparagasm is “aspirational vegan fine dining for vegans, vegetarians and anyone.” In partnership with Disappearing Dining Club, Asparagasms (!) are meat- and wheat-free monthly “dining extravaganzas.” I admittedly take issue with such description. “Dining extravaganza” suggests dinner theatre and perhaps dancing girls, though with a name like Asparagasm, presumably the folks behind it expect the average punter to attend such an event, leave hugely satisfied, and in need of a very large cigarette.

And while I didn’t want a smoke afterward, I did enjoy it. Delightfully decorated, and definitely buzzing, Vozars was transformed into a sort of urban-garden-cum-bistro complete with a cocktail bar and several lovely little tables spilling down 3rd Avenue. The menu is simple and from what I could tell, relatively seasonal. My dining partner and I chose the Prix Fixe menu and for starters ate smoked gazpacho, and avocado, black bean and sweet corn ceviche. The gazpacho was delicately smoky, and dare I say it, rather creamy. Made purely of yellow fruit and vegetables, it was refreshing and beautifully seasoned. It came with little squares of callaloo fritters, oilier than I’d have liked, but with a nice little crunch that offset the cool soup. The ceviche was equally as wonderful. Creamy avocado was paired with slightly smoky black beans and crisp sweet corn in a zingy marinade. Despite being served with an unnecessary papaya jelly in the base of the serving glass, the combination of flavours and textures were so pleasant, I could have eaten much more.

For mains, we had a jerk sweet potato and vegetable curry with brown “party” rice and petit pois, and English asparagus with polenta chips and smoked tomato BBQ salsa. As you’re beginning to notice, there was a lot of “smoked” on the menu, which I suspect is to add a dimension of flavour that may have otherwise been difficult to recreate without meat. In any case, the asparagus was well seasoned, if slightly overcooked; the chunky polenta chips added texture, BBQ salsa added flavour, and on the whole it was a filling and pleasing dish. The curry was perhaps an easy choice but was tasty all the same. The sweet potatoes were nicely cooked and the curry had a lovely subtle heat. Finishing with a fantastic take on knickerbocker glory with gluten-free cookies and dairy-free ice cream, and an apparently “very vegan” but rather bizarre version of chocolate mousse made from avocado, chilli and bitter chocolate, we left happily sated.

Am I converted to veganism after dining at Asparagasm? No. Am I impressed with vegan eating? Absolutely. Ethics aside, for me eating vegan is about using the best quality fruit and vegetables as an opportunity to show off some dazzling tastes. At Asparagasm, meat was not missed. Instead flavour, freshness and a few smoked pulses, this time, hit the v-spot.

£58 for two, including drinks and service 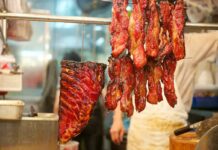