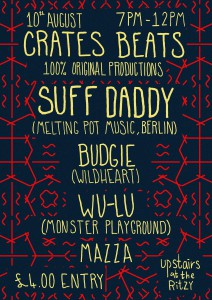 CRATES has been going for over a year and half Upstairs at the Ritzy and is very quickly becoming a solid part of Brixton’s  underground music scene. Founder of CRATES and local producer’s Wu-Lu and Hector Plimmer also known together as duo Monster Playground an active part of London’s underground music scene with a show on NTS Radio continue along with the extended CRATES family with their efforts to create a platform to showcase some of the freshest underground music talent both locally and internationally.

This sunday 10th august Crates Beats Showcase will be bringing their special guest and over seas talent Suff Daddy over from Berlin. Suff’s music gives reference to 90’s hip hop, having been influenced by his older brothers collection while growing up in Düsseldorf, Kraftwerk’s home city. Suff Daddy will also be joined by Budgie (Livin’ Proof) Mazza and of course Monster Playground who will all take to the decks through the course of the night.