Part six of a series in which our Features Editor, Keith Lewis, along with Photographer, Jeannine Mansell, meet some of the residents of Cressingham Gardens. 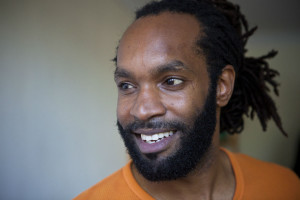 “It’s funny how your memory get’s stuck on one thing, isn’t it,” says Charles, who lives on Bodley Manor Way.

We are talking about a road trip he took with his family back when he was eight years old.

“All I seem to remember about it is a fly in my porridge one morning. I guess we must have been crossing Lake Malawi because we were on a boat.”

Charles and his family had travelled from Zimbabwe to Uganda. It seems that Charles has done a fair bit of travelling in his life. His fridge is covered in magnets from all over the world.

While Charles’ family now live in Zimbabwe, his father is originally Ugandan and his mother half Indian and half Rwandan.

“My parents had to leave Uganda. It was the time of Idi Amin,” he says. “So I was brought up in Zimbabwe. Then I came to the UK, for two reasons – one, to win the lottery,” he jokes. “And two, to get an education. Not sure I’d leave Brixton now though. I like it here.”

Charles went on to get a Degree in Computer Science at Kingston and complete a Masters in e-learning, although he hasn’t won the lottery yet. In fact, Charles now works in higher education advising teachers on e-learning.

“It can be hard work. There are some real dinosaurs in education,” says Charles, grinning.

I look around Charles’ kitchen. There are four LPs hung on the back wall.

“That’s a young Lionel Richie,” I say, from a distance. 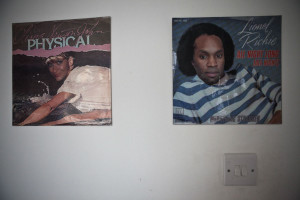 It was the All Night Long single cover. Now I notice that a different face has been pasted on to the cover. It was Charles. We both laugh. Another one of his friends was the face of Hot Chocolate, on the “Best of” album cover.

“I had a vintage vinyl party a while back,” laughs Charles. “We have friends around quite a lot actually. I don’t own this place. I’m looking after it for a friend who’s gone back to Zimbabwe. There are a few of us here so I guess that makes me the landlord,” says Charles. “I’ve got a really good deal.”

He shows me the garden out back.

“Probably could do with some work. I do the weeding occasionally… you know, when I was at school in Zim that was kind of our punishment, doing the weeding. A little like a detention but we would have to do labour. Weeds are the things that usually grow taller than everything else, aren’t they?”

He looks over the fence.

“It’s not like we need a big garden anyway. You could almost throw a stone into Brockwell Park from here,” he says. “I do like this place. I lived on a high-rise estate in Hackney a while back. You might recognise the people that live below you, or above you, but you don’t get to know them, not like here. I think all the communal space helps. And you can see your neighbours through their kitchen windows. I also get to know a lot of people because I’m the Block Rep.”

“I’m the social contact for the road. I link in to the tenants association and keep people on Bodley Manor Way informed – keep them connected. I guess I should have a wonder around and see people this afternoon, actually.” 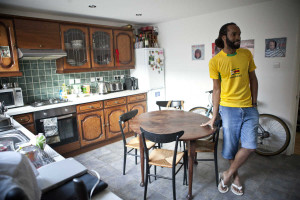 “So you knew Rosa?” I ask. Rosa lived next door until she passed away a few months ago.

“Of course,” he says. “And Margaret and all those guys. They loved getting together for tea and biscuits. After Rosa died the council moved a family in straight away.” He stops and thinks. “Quite quickly really.”

We’re back in the kitchen. A copy of a tabloid supplement on the world cup sits open on the table. Apparently, one had been delivered through almost every door across the UK the night before.

There’s a headline: something about England being the only country of true genius.

Charles’ brother, Steven, who has now joined us, points to it. “And can you imagine what it would be like if England win the world cup,” he says, rolling his eyes.

Steven had a Zambia t-shirt on. It was orange and he had worn it the night before because the Dutch were playing.

“It’s just something we do,” explains Charles. “Collect football tops from anywhere we go. I’m lucky, London means you meet a lot of different people and I get to do a lot of travel, going to all their weddings.”

Just then there’s a light knock at the door.

“I recognise that knock,” says Charles, standing up to open it.

It was Sara from over the way. She had two crumpets in her hand, one on top of the other, with a layer of Nutella between them. Beaming, she tells us that her studies have paid off and she’s just been offered a job at Christchurch School in Battersea.

“It was just a matter of time,” says Charles, with a smile.